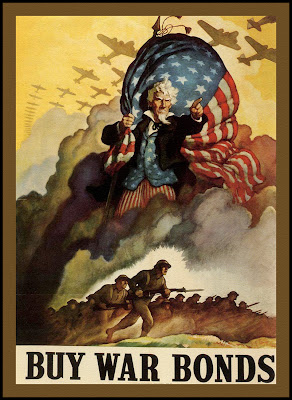 The persona of Uncle Sam seems to be at its best when he's grim and determined, rolling up his sleeves or stepping out smartly in times of war. I haven't seen him showing up for the recent wars. Maybe a little bit in editorial cartoons. I don't know if he's retired because we're too sophisticated to need an icon to follow where few of us want to go, or if he would be up for ridicule from the rest of the world, or maybe I just haven't been near a recruiting station lately and he's still hard at work.

Now believe me I'm not being unpatriotic when I say this, but regardless, I'm not sure if I've ever seen an Uncle Sam image in a benevolent situation, say helping to rebuild villages or some such. Images of him handing out candy to street kids in other countries or playing soccer with them would be pretty patronizing. I wonder if there's a government agency that controls the use of Sam, like there is for the use of Smokey the Bear, and they're saving him for some grim time . . .
Posted by Thomas Haller Buchanan at 5:19 PM

Uncle Sam developed outside of the US government, and they'd run afoul of the First Amendment if they tried to claim him as something like a trademark.

A trivial but (to me) interesting datum: Uncle Sam got his beard from Abraham Lincoln. At some point during his Administration, a cartoonist depicted Lincoln dressed as Uncle Sam, and thereafter Uncle Sam typical drawn with roughly the same sort of facial hair.