Among many talented cartoonists over the years, Will Elder was one of the top, even though he specialized in satire, and much of it with his compatriot Harvey Kurtzman.

Originally published in Trump magazine in 1957, this illustration satirizes good girl pulp illustration from a decade before. Elder brings his usual 'chicken fat' (extra little sight gags) to the drawing and shows that he could have given Virgil Finlay a run for his money if he had seriously worked for the pulps. 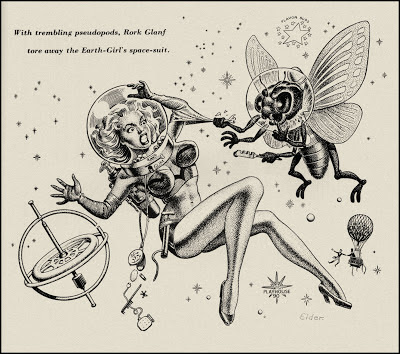 The original art is here: http://illustrationart.blogspot.com/2008/05/one-lovely-drawing-part-19.html

I just searched for (and found!) that image on your blog by Googling: "with trembling pseudopods" + "Trump magazine." I remembered that caption from the copy of Trump magazine which I had bought when I was a teenager back in the 50s, some sixty-five years ago. My copy of the magazine long ago vanished into the dustbin of history.

But what I'm actually looking for is the time travel sci-fi story which accompanied this illustration (The gag was that the illustration had absolutely nothing to do with the story, but was just a teaser to trick you into reading story). Do you recall the title of that story?

The reason I'm looking for it is that just last night I watched on DVD a time travel movie, "Predestination," which had a plot that reminded me a lot of that story.