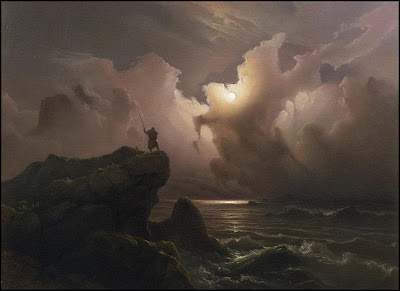 Knud Andreassen Baade
Scene from the Era of Norwegian Sagas — 1850
Posted by Thomas Haller Buchanan at 12:12 AM 1 comment:

Have you ever thought much about 'automatic writing'? Otherwise known as psychography, it's writing 'which the writer claims to have produced from a subconscious or maybe a spiritual source without awareness of the content.'

Similarly 'inspiration' 'refers to an unconscious burst of creativity in a(n)...artistic endeavor.' 'In Greek thought, inspiration meant that the poet or artist would go into ecstasy or furor poeticus, the divine frenzy or poetic madness. He or she would be transported beyond his own mind and given the gods' or goddesses' own thoughts to embody.'

Hmm. Every once in a while, I sit down to a blank sheet of paper, sharpie pen in hand, clear my mind, staring inward through the paper to a bare room, painted white (but with no light on), filled with white noise and a hint of Michael Jackson doing the moonwalk in the dark while humming to himself. Or something to that effect.

And then I draw. I draw without thinking, without stopping, without being aware of what I'm drawing, mostly without taking my pen off the paper. All in 30 second intervals.

This drawing is one recent result. Hmm, 'given the gods' or goddesses' own thoughts to embody...'

Anybody have a good anger management class to recommend for the gods and goddesses? 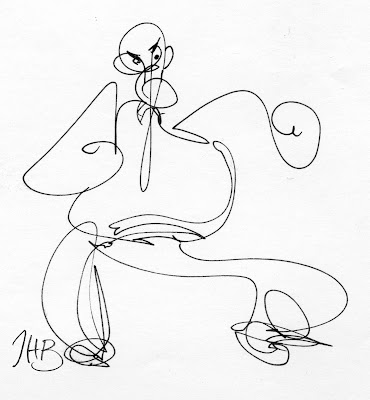