These ads with art by Stark Davis, from the 1920s, have my vote for the most beautiful automobile advertisements—EVER. And there were others in this series. When I was at the Art Institute of Chicago, Davis was legendary among the instructors and students.
It has to be admitted, at least from my point of view, that the typography of 'Lincoln' in the background adds a lot to the appeal of these graphics; the name itself is classic as is the type font, and the subtle coloration is gorgeous. The cars themselves are pretty nifty. 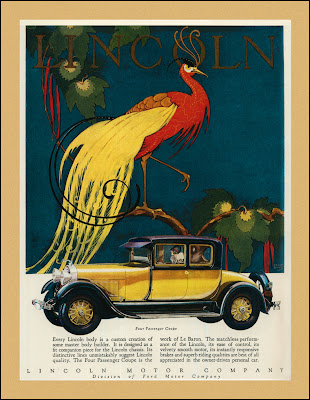 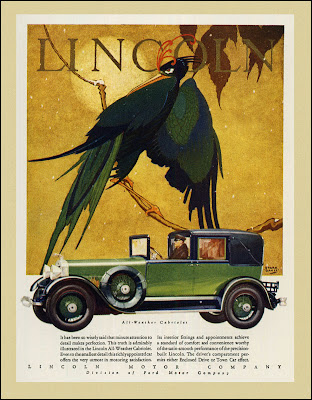 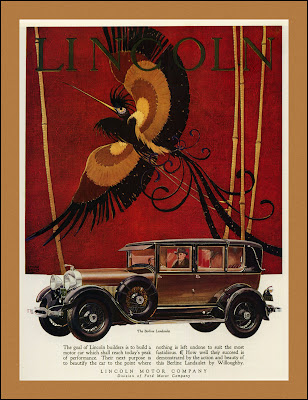 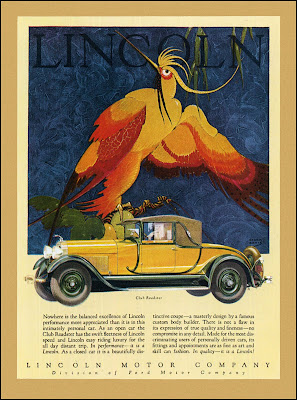 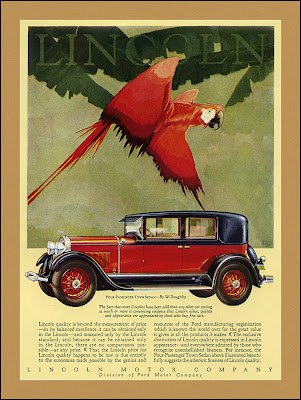 Winthrop Stark Davis was born in Boston, Massachusetts in 1885.  He subsequently lived and worked in Chicago, where he was affiliated with several arts institutions including the Palette and Chisel Club.  Davis exhibited at the Art Institute of Chicago in 1924 and at the Chicago Galleries Association in 1930, winning prizes in both shows.

During the 1920s and 1930s Stark Davis’s illustrations appeared on covers of the Ladies’ Home Journal, and in numerous advertisements, and from 1927 to 1929, Davis’s artistic and colorful “Bird Series” of ads for Lincoln automobiles ran in popular magazines such as Country Life and Home and Garden.  A typical ad would feature a Lincoln sedan or coupe in the foreground, with a peacock, a wide-eyed red bird of paradise, or a condor dramatically filling the background or framing the scene.

During his time in Chicago, Davis would make trips to Santa Barbara, California, and subsequently relocated to Los Angeles, where he worked at the Disney Animation Studios and exhibited at the Ainslie Gallery in 1936.

By 1947, Davis had retired from painting and was living in Morro Bay, a seaside town on California’s Central Coast.

Stark Davis passed away in Marin County, California, in 1950.

Posted by Thomas Haller Buchanan at 8:32 AM

Labels: A few of my favorite things, Stark Davis, typography