The Timken Roller Bearing Company commissioned J.C. Leyendecker to paint portraits of war commanders for 1944 war bond ads & posters, of which here are 2 examples.
The geek in me likes to think of this first one of Admiral Kirk as a portrayal of an inspiring ancestor of Admiral James Tiberius Kirk of the 23rd century.
The second one is of General 'Vinegar' Joe Stillwell, who I thought maybe was portrayed in a movie by Karl Malden, but I'm probably mistaken. 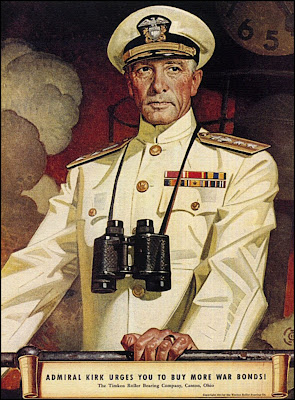 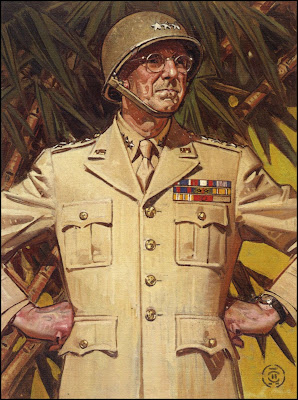 Yes, I think you're right. I thought maybe in one of those Tora Tora Tora kind of films, but I don't have the patience to look up Malden's filmography.

I hadn't seen the Leyendecker portrait of Admiral Kirk before. Nice.

Second it, Malden played Bradley in Patton. Poorly I might add.

I love Lyendecker's work. I've never seen any of his portraits until now.

Wouldn't it be wild to do a Lynedecker style portrait of Admiral James T. Kirk?

Or would that just be too geeky?

M.D. — I think that would be just geeky enough.