With all the remakes and re-envisioning of old films and books, I'm surprised that a 21st century version of T.H.White's Arthurian/Merlinesque adventures hasn't been made ala Lord of the Rings' digital film magic.

The musical Camelot was based somewhat on White's Once and Future King, and Disney did the animated Sword in the Stone,  but it would be nice to see a faithful version of White's unique version translated to the screen. And, of course, Alan Lee should be the visionary for it, as he partly was for Peter Jackson's LoTR.

I know, at this point it would be like one more Gandalf or Dumbledore, even though Merlin was the original once and future wizard, and isn't there room for more in our collective imagination? 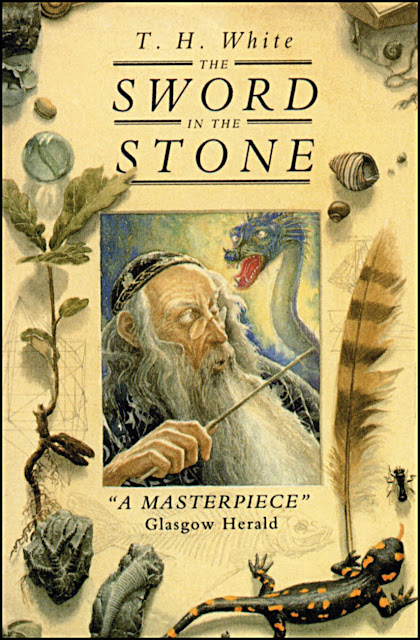 Alan Lee — The Sword in the Stone

I quite agree! Gandalf and Dumbledore are the new flavors of hermit wizard and they are great ones, but Merlin was the prototype and I'd love to see a faithful rendition of that particular mythology.

Thanks Sara, nice to hear from you.

Are you people all joking?!?
I can't believe you're serious on this!
That would be awful. The Sword in the Stone and the Once and Future King are our personal secret treasures. We don't want the Temple Merchants and their hired (creative or not)hands spoil it with their dirty fingers, their myopic hearts and their sycophantic limited imaginations.
I, for one, am so glad that T. H. White has escaped the visor of the Hollywood mercenaries.

And, yes, it'd take me hours to explain this convincingly in writing, but I'm sure the following phenomenon is well enough known: Things lose their spirit and their depth when they're made too easily available through mass-consumerism.

Yves, I'm sorry, I don't know what I was thinking. I'll call Spielberg and Jackson back and tell them to forget what I suggested. They'll argue, but I'll tell them to expect your written case.

Seriously, I know what you mean, but what if, for once, it was done perfectly right? Our secret treasure really isn't much of a secret—White has many many friends out in the world.