A long time ago in a land far away, I, as an 8 year old kid, watched one daytime show regularly (after school? In the summertime? I don't know). It was called Who Do You Trust?. It was a game show hosted by none other than Johnny Carson.
I watched and enjoyed it enough that I can still recall to this day, Mr. Carson announcing that he and his sidecar Ed would be leaving the show to sign up for a new night time gig. I remember actually feeling sad that I would miss Mr. Carson's daytime antics. But, as a 10 year old, I somehow wangled to watch Johnny Carson's premier as host of the Tonight Show, and somehow wangled to watch many of those shows over the next few years. I even saw that famous Ed Ames tomahawk routine when it first aired, long before it was a 'best of' clip.
Finally, my admiration for Johnny (may I call you Johnny, Mr. Carson?) got the best of me and I fired off a fan letter to his office in New York City in 1966 (BookSteve's favorite year, yay). I didn't ask for, nor expect, anything, but shortly after the 4th anniversary of his hosting the Tonight Show, I received a picture postcard from the man himself.
It arrived a bit scuffed and water damaged, and I'm guessing now that it was probably signed by an assistant (or maybe it really was Johnny—I'll never know), but it was a nifty prize for a 14 year old fan of the man.
I just found the postcard again in another old box of my mother's papers that I'm going through. I just never know what I'll find next. 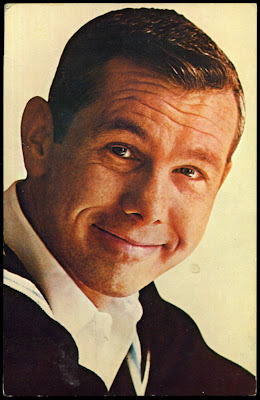 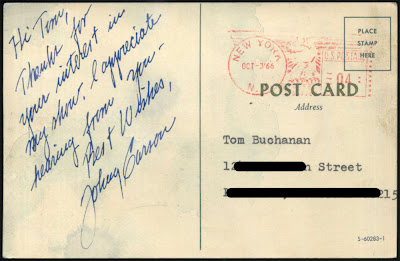 flip side
(my mailman used to be pret-ty impressed with my mail back in those halcyon days)
Posted by Thomas Haller Buchanan at 11:24 PM

Hi Thom,
It's great to come across something that triggers good memories. I doubt it's really Johnny, but then, perhaps it depends on what you wrote to him, whether he gave you a personal response.

That's awesome. Johnny ruled. Sure do miss him.

Wow! Carson was a great hero of mine -- he really connected with people. You've got a treasure!