Zoom to School Over the Cloudlets

When I was a kid, inventors were all the rage. That's probably the case for all kids in all generations, but really, the 'space age' was the age of the future. Things had to be invented for the future to unfold the way it was being predicted. I would sit in church and daydream all the inventions that would make life more interesting.

One of the inspirations for wild daydreams was an inventor by the name of Gyro Gearloose, who usually invented just what was needed to solve a problem for his clientele. Sometimes he had to whack himself in the head and see stars and then invent something while in a delirium. I think that probably kicked his right brain into gear, while his left brain worked on automatic pilot. 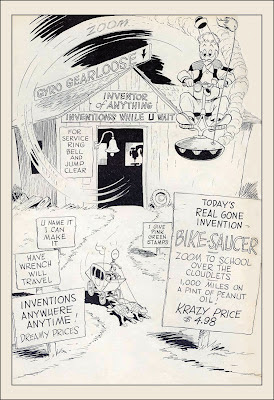 There are inventors and there are tweakers. The tweakers are forever noodling with a great invention, to try to improve it and change it gradually into something else. Sometimes it's changed into a complicated  gadget that basically does what the original invention did, but takes the fun out of the early concept.

Airplanes have gone from barn-storming jennies that any adventurous soul could master to ultra-complex ultra-sonic jet fuel guzzling monster birds that can only be piloted by specialists with years of dedicated training.

Cars used to be sweet little contraptions with great diverse looks, that the owner could tinker with and fix problems and even replace a carburetor if needed. Now cars all look like one another and need specialized mechanics to hook the car's computer up to a diagnostic computer and then adjust components to just the right micro-tolerence.

Computers and the internet were once the domain of geeks bearing slide-rules (remember those?) and then finally reached a level where ol' grandma and you and I could figure out how to operate them and accomplish things with 'em. But there's always a new software, a new OS, a new plug-in gadget, all of them needing learning curves, special chargers, special training. Platforms that won't talk to each other without buying a special translator program, or things that you'd like to program or download, but nope, it's only for Microsoft, or nope, only for Mac. Oh, that great cutting edge computer that you bought last year? It's phased out, nearly obsolete, time to buy a new one, oh a new and improved one that does all the things the other one did, but it's been tweaked so that you have to learn new protocols and procedures.

Blogging was a great invention, a way for every person to communicate and publish, but now there's all kinds of options and decisions, hidden costs (ah, yes, extra storage), and just when you're comfortable with the program you're using, they imPROVE it, so that it does the same basic thing as always, but give you new learning curves, changing the look just for the sake of change.

It used to be that I could just whack myself in the head and see stars and kick my right brain into gear while my left brain worked on automatic pilot and blog, blog, blog for the fun of it for you and I. Now my left brain is in charge, trying to figure out which icon to click, which size to make each image, what unfamiliar color will work for the text, yada yada.

Change for change's sake, that's what inventing is about anymore.
Posted by Thomas Haller Buchanan at 10:44 AM

I still have two of them.

I have quite a few slide rules. But, while I never forgot how to use one, it has been more than 30 years since I did so other than during restoration, or for fun, or to teach a friend how to use them.

However, consider this: Every semi-conductor in an area hit but a high-intensity electromagnetic pulse (as from a solar event or from an act of war) would be fried. Devices that instead used vacuum tubes would come back up once the pulse were passed. And slide rules would simply never have stopped working.

Good point, Daniel. Seriously, I worry about that pulse all the time. Our society is SO vulnerable from putting so many eggs in one basket. At least you've kept one egg out.