Back in the late '60s / early '70s, the Warren line of 'creepy' and 'eerie' magazines stood out on the newsstands as something different for 'mature' readers. A degree of violence and nudity had found their way into comics far beyond what the Comics Code Authority would ever have allowed. But being magazines (and the times), young people like me found comics interesting again (at least for a while), and early on thrilled to find Frazetta covers on many of them.

The one interior artist that stood out, for me, with his graceful lines and dynamic compositions was Estaban Maroto, ultimately the only reason I would buy any particular issue, having found the stories themselves usually banal, trite, predictable and boring. 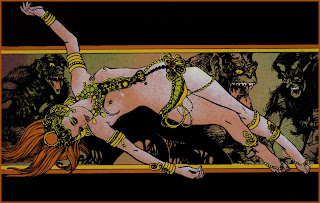 As so often, I completely agree with your entry.

Paul Neary did stuff that was technically superb, but seemed to be written (by others) and drawn for sadistic misogynists.

I'm really saddened by much of the work that Reed Crandall did for Warren. I believe that his abilities had been persistently impaired by his earlier period of alcohol abuse.

Unfortunately a lot of Maroto's stuff was traced directly from Jeff Jones's work, (Idyll mostly) some also from Frazetta.