Another Pogo Sunday from 45 years ago today: 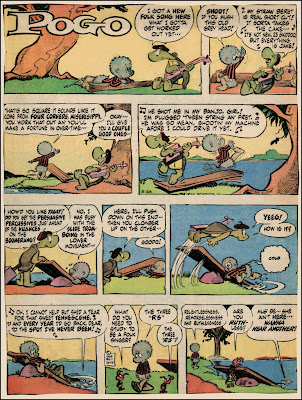 And finally (drumroll please), the Pogo "Mars" sequence is ready to start rolling. It is so saturated with Kellyness that I decided to let the sequence have its own 'blog. The image below is the header, and this is where you can find it: Pogo in Pandemonia
There is another blog, The Fabulous Fifties, that intends to showcase the sequence as well, and who knows maybe others have or will be showing it around the world. But my showcase will be in pretty high resolution and from my perspective of having talked with Kelly about the sequence before it was ever published (as explained already in Pogo in Pandemonia). My one shortcoming is that the Sunday strips, that I collected week by week when they were first published, are the tabloid format, dropping one panel from each page each week. Maybe we'll be able to see those over at The Fabulous Fifties.
But the run that I have is pretty complete, and I'm going to begin the run at the first week of 1966 to include all the build-up. It will be more than a year's worth of material, but it certainly won't take that long to see it, as I will show up to a month's worth at any one posting.
Stop in, hope to see you there, hope to see some comments.

Posted by Thomas Haller Buchanan at 8:52 AM

This is exciting beyond words---Kelly is my favorite cartoonist, and the single greatest influence on my own cartooning...

PANDEMONIA is also my favorite Pogo sequence, and I think, Kelly's best work...I remember wishing back when JURASSIC PARK was creating din0-maniathat someone would do a coffee table book called "Jurassic Pogo"...

As fot "tabs" VS "fulls"--I PREFER tabs. That's how I saw it in the Chicago Daily News as a kid (and my tearsheets are Daily News tabs), and I love it that way--they look like perfect comic BOOK pages. (I've often wondered if POGO would've had the full effect it DID have on me if the Daily News ran fulls.I've seen them since, and the extra panels don't matter to ME)...

THANKS for doing this!

Thom,
I'll be following you on that blog too!
I loved the punchline - 'ruth-less!'
Thanks

This is great news! I will direct all my readers here. I have tabloids and tabs, but most of mine are still waiting to be scanned. I would love to share what I have with you. I scan at 300 dpi and create a smaller version for the weblog, but if you need a larger scan, I can do that.

I'm excited too. I've been wanting to see this work given its due for so long. Not that mine will be the definitive one. I'm still waiting for the coffee table book as well. If I were to ever win the lottery, I would seek rights to publish the most beautiful book ever of Kelly. Ah I can dream.

In the meantime, over at Pogo in Pandemonia, I welcome collaboration and hope to get Kelly fans everywhere to share comments and stories about Kelly and what he means to all of us.

Great, thank you. As they say, the more the merrier!