Walter Crane was a magnificent book illustrator who also was a master in the decorative arts, collaborating now and then with William Morris. Here is a wall hanging that is pretty magnificent in its own right. 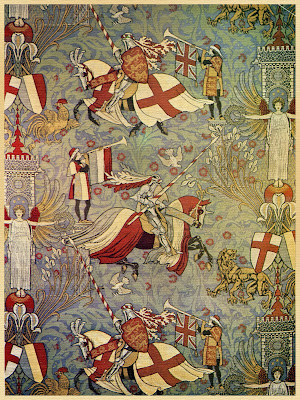 Posted by Thomas Haller Buchanan at 11:46 AM

Thanks for sharing, Thom. This is exceptional.

Except... I can’t believe that Crane was this good an artist, but got the construction of the Union Flag wrong! Somewhat spoils the whole thing for me…

Well, I hate to have it spoiled for you, Ant, so let's look at it this way:

So, the tourney horse galloping in from the right appears to ride under the colors of Saint George, as is the shield over the lion. Riding in from the opposite, wearing vertical stripes on horse and banner, with shield over a bantam cockerel is a knight's insignia unknown to me.

Looks a bit like Turkish miniatures, an inspiration, perhaps?

Hey, Thom, thanks for taking the time to reply.

Your rationale is ingenious, but flawed. The "diagonal red cross of Saint Patrick" - "agent a saltire gules" - is a fiction: It’s actually from the family arms of FitzGerald, who had been sent by Henry II of England to aid Anglo-Norman rule in Ireland. It had never been used as an emblem of Ireland by the Irish, and was only thrust into this role when Ireland was added to the Union in 1801 and needs must be represented in the flag along with England and Scotland. And where does the blue field come from, if not from the Scottish flag — "azure a saltire argent"? Really, it’s too close not to be the Union Flag! But thanks for trying!

The vertical stripes on horse and banner — "tierced in pale azure, argent and gules" — clearly represent the French tricolour, in counterpoint to the English "argent a cross gules" of St. George. Although, in another fit of heraldic pedantry, I have to point out that at the period the wall hanging depicts, the French flag & shield would have been "azure semy-de-lis or" — a blue field strewn with golden fleurs-de-lis — or "azure .iij. fleurs-de-lis or". In fact, you can make out 3 golden fleurs-de-lis on the blue cloth hanging from the reins of the knight's horse (where the other has "English" roses picked out in gold) and a fleur-de-lis on the top of the bridle (where the other has three ostrich feathers, the badge of the Prince of Wales).

The cockerel — le coq gaulois — has been a French national mascot for hundreds of years, and persists today in the badge of the French rugby team, for example.

The winged woman holding the wreaths is, of course, Nike, Greek goddess of victory. I assume that she holds two wreaths, rather than her usual one, to indicate that both the English and the French knight are victors, perhaps signifying the entente cordiale between the two nations since 1844.

So, the construction of the Union Flag aside, Crane seems to have understood his symbolism.

PS. Thank you for a fascinating blog!

Yow. Wow. It sure looks like you know your stuff. THIS is what I like, comments with layers of substance. Thanks!