The Batman persona as designed similarly, yet distinctively different by 3 of his great delineators. 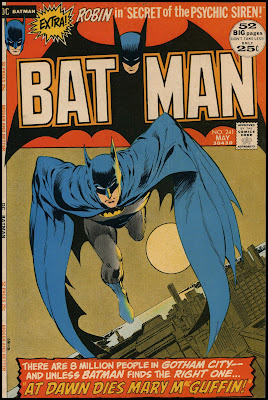 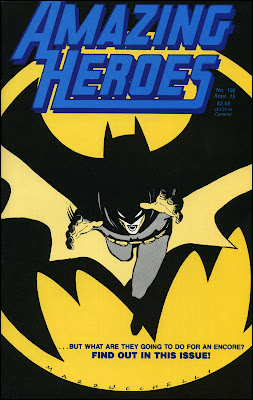 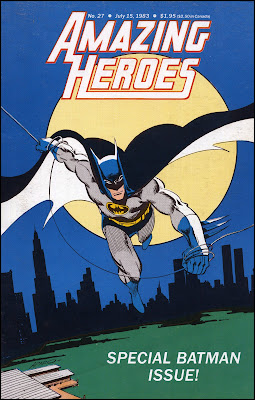 Far be it from me to say anyhting about Neil Adams of Jim Aparo (those guys are giants!) but Mazzucchelli's stark depiction really stands out for me. Even the coloring, understated as it is, seems superfluous.

Adams and O'Neil of course had restored the Batman from ruins, and when I think of the Batman I think first of him as drawn by Adams.

I'd not cared at all for the earliest work by Aparo that I'd seen, but at some point I noted that he was doing a superlative job with the Batman at The Brave and the Bold. I began to look at my crow-quill pen with new respect when I read that Aparo was using one.

Adams was more influential than most fans will ever know. It was he, after all, who ushered in the cult of the artist over the material -- he blew deadlines like clockwork without regard to his editors' predicaments. Now whole schedules are structured around the availability (and working pace) of one or the other "hot" artist, and aren't comics all the better for it?

The woefully underrated Aparo, on the other hand, turned in penciled, inked, and lettered work on time, almost every time. Artistically he was incredible, able to do things most other comics illustrators could not, and more importantly a total sweetheart thoroughly charming through all his humility.

PS: It's also worth noting that the Adams "Batman" image shown here is greatly enhanced by the remarkable and evocative inking stylings of a young and talented Bernie Wrightson, making for an especially spooky Dark Knight.

first artist I think of when I think of Batman has always been Aparo. I know that Adams' Batman was the ground-breaker, but I really loved Aparo's Batman as a kid.