I'm not a fan of Boris Vallejo's work (oh, and I'm sure that breaks his heart), but there have been a few works of his that made their way into my morgue. Most of his paintings leave me exceedingly cold (there are a few exceptions), but some of his earlier pen and ink drawings are pretty to look at, such as this one: 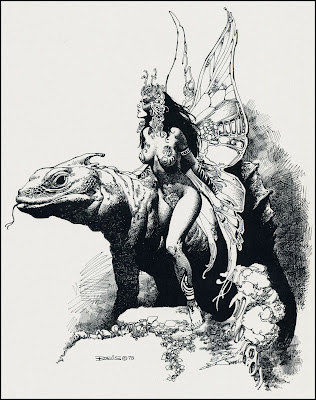 i'm with you on Boris! talented yes but most of his work is uninspired and lacks any kind of life at all. plus he's basically made a career out of ripping off Frazetta's concepts (i see one more mossy tree limb in a Boris plainting and i cant be responsible for what happens!)but as you say every once in a while one of his pictures (usually the older stuff) makes ya go hey, that's NICE, including the one you posted! Mr Door Tree has posted some nice examples of Boris' work as well.

In Vallejo's work the lighting is pretty much always the same, the humans and near-humans all seem to be drawn from the same demographic, and the same firms seems to provide all the costumes and weaponry. And none of these is so wonderful that I want to see that much of it. For example, the population seems to fit a notion of physical beauty that was perfectly conventional when Vallejo first became famous.

That's how I feel about Boris; you look at some of his earlier work and say "hey, there was a real artist there at one point, not just a self-parodying hack. What the hell happened?"

I kinda needed to see a woman with butterfly wings and a lizard right now. It's very 1978, reminds me of the LOTR calendars and faerie books and so on that came out in the late 80s. Even so, a nice image, thank you for posting it.

It is strange, but I like Valejo when he resembled Frazetta and Esteban Maroto, and those later works which are truly in his own style leave me not so interested. But those later works for some reason are most available and most praised (maybe because they are so widely spread).

Always hated Frazetta myself. Good riddance to bad rubbish. That film Fire and Ice was Garbage.

I'm with you on Boris too. He knows his way around a paintbrush for sure, but he seems to leave any actual creativity at the sketching stage.

If you look at a Frankie (Francis) Bacon, you're struck by how repellent he finds the human body. It's almost as if the 'Catholic' part of him finds its power over him sordid, unclean, detestable. Yet there's clearly this other part that finds the thought of wallowing in his own and other people's filth delicious - i.e, if it isn't sordid, what's the point?

With Vallejo, though, you have no sense whether he's repelled by or into tits - men's or women's - crotches, armpits, arses - ditto, ditto, ditto! Or even that he enjoys roundness, pendulousness, softness, hardness, tininess, hugeness, curves, angularity, wetness, dryness, smoothness, hairiness, convexities, concavities, etc., etc., etc.

He might just as well be painting a slab of sterile processed cheese for a generic supermarket ad.