I haven't purchased or read new comics for the last several years. I'm sure there's some good stuff out there somewhere, but it's too cumbersome to look for it. I mourn the passing of the days when comics were just a good ol' goof ball of a time, with art that was solid and stories that were, well, goof ball, but fun. The golden and silver ages were cool, but some of the best art and stories were from the DC Bronze Age world—artists like Gil Kane (at his finest), Neal Adams (at his finest), Joe Kubert (at his finest), Curt Swan (at his—okay, you get the point of being at their finest), and oh some many others, including Nick Cardy (sigh, yes, at his finest).
My personal method of bracketing the Bronze Age is from the time of the go-go checks on DC comic covers, in the mid 60s, to Frank Miller's The Dark Knight Returns, in the mid 80s. I grew up in the silver age, but my fondest memories of the comic book experience are from that Age of Bronze. After The Dark Knight, there was some good stuff, but primarily dark and gritty, with bewildering continuities. And now DC is going to reboot continuities once again, but I'm pretty sure they're not going to be getting any of my money.
Wonder Woman has been drawn by a millyum artists, with a millyum different takes on her personality and costume. But my all-time favorite WW 'look' is from the Bronze Age, by Nick Cardy. Simple, clean, stylish. If only the new reboot had this look and feel on all their books, I'd be spending a LOT of money on comics, and I think some of you would as well. 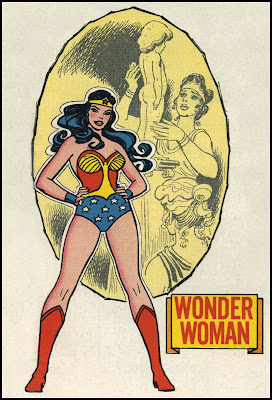 I'm a Bronze Age Boy myself -- I think the art, story-telling and sense of fun-mixed-with-a-more-adult-sensibility was a perfect mix. I miss those comics -- and can't even look at those of today!

Thomas, thank you, that is beautiful. He did a great Black Canary, too.

Thanks for this - I completely agree with you about dc's bronze age. I became a fan during the mid-late bronze age.