A Kind and Gentle Soul

A really great friend of ours passed away very recently. It was after a long illness, yet still it was a shock to actually lose him. He was the guiding force of Middle Earth Publishing, which was famous for having published fantasy art portfolios in the 1970s, showcasing the likes of Frank Frazetta, Jeffrey Jones, John Severin, Barry Smith, Howard Chaykin, Mike Ploog, and a number of others.

This was a man who actually art directed Frank Frazetta, staying at his house for a number of days at a time, and actually served as a model for one of the portfolios. I will be producing a tribute to this man as soon as I can make time, and you'll learn more about him then. In the meantime we are greatly saddened at his passing. He was a kind and gentle soul . . . and Harlan Ellison is still pissed at him. More about that later. 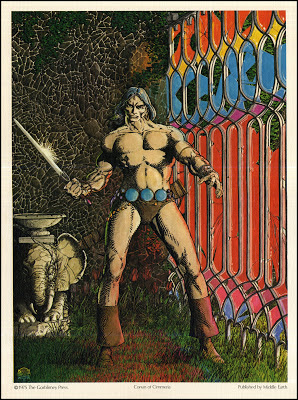 Sorry to hear about the death of your friend, Thom. Although it's a cliche, as long as you remember him, he'll never truly die.

Regarding Barry Smith's art here, nicely rendered, but not the best example of his work I've seen. The head seems too small, the neck broken, and the legs far too long.

And who ain't Ellison pissed off at?

I'm sorry, Thom, for the loss of your friend.