Pictorial photographer Victor Keppler worked for all the slick magazines and ad agencies in the '30s, '40s and '50s.

His illustrative photograph of Queen Nefertari was for a slick magazine in the '30s, and great care was taken to be as accurate as possible in historical detail — with one minor exception, according to Keppler. Her left breast should have been exposed, but it was felt that was a bit too daring for mainstream America in 1936.

I made a quick pictorial search to see if that was indeed the case, but have not yet found reference that indicates that was so for Nefertari. 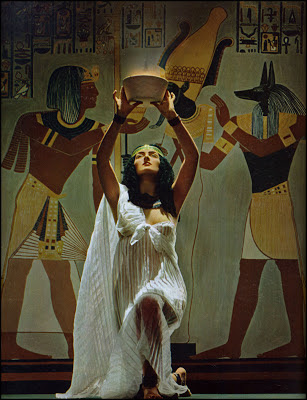 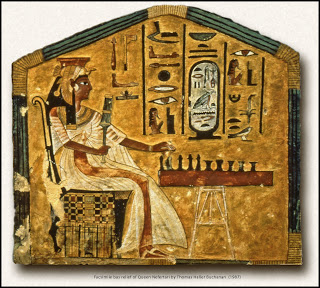 My connection with Queen Nefertari, for what it's worth, is that I created a facsimile of a famous bas relief of her for a 1987 museum exhibit of Ramesses the Great, sitting side by side with authentic ancient Egyptian artifacts (mine was labeled as a facsimile). It was full size to the original, which was not available, and I created it by making a thick slab of plaster of paris and then chiseling out the negative space, just as the original was made (from stone), and I then distressed and painted it. My fingers were so numb from chiseling that my hands were useless for weeks. One has to wonder how the artisans of ancient Egypt filed for workman's comp.

"Nefertari, also known as Nefertari Merymut, was one of the Great Royal Wives (or principal wives) of Ramesses the Great. Nefertari means 'Beautiful Companion' and Meritmut mean 'Beloved of [the Goddess] Mut'. She is one of the best known Egyptian queens, next to Cleopatra, Nefertiti and Hatshepsut. Her lavishly decorated tomb, QV66, is the larges and most spectacular in the Valley of the Queens. Ramesses also constructed a temple for her at Abu Simbel next to his colossal monument.

Nefertari held many different titles, including: Great of Praises, Sweet of Love, Lady of Grace, Great King's Wife, Lady of The Two Lands, Lady of All Lands, Wife of the Strong Bull, God's Wife, Mistress of Upper and Lower Egypt. Ramesses II also named her 'The One for Whom the Sun Shines'."

I remember that 1987 exhibition! I saw it in Montreal. Your facsimile is very impressive!

Thanks ToB. My wife and I did a number of facsimiles that traveled with the show. A couple have been on permanent display here and there.

In the original her breasts are covered but the dress appears to be open all the way down the front. Or am I reading the picture wrong?

I'm sure that Keppler were sincere, but wrong about the breast.

The device of exposing a woman's left breast in art was sometimes used, in the time of the Middle Kingdom, when the woman was wearing enough clothing that it might otherwise be difficult to discern her sex. We cannot reasonably infer that women wearing heavy clothing in the time of the Middle Kingdom typically exposed their breasts simply because artists of that era resorted to this device. (I doubt that a woman would usually want her left breast exposed under circumstances in which she were wearing heavy clothing.)

And Nefertiti was, of course, a figure of the New Kingdom.

Meanwhile, your facsimile was very impressive!

I see that ToB and then I used virtually the identical phrase to describe your facsimile. I guess that you'll just have to take our word for it.

Thank you Daniel, if it's you and ToB, then I can bank on it.

Ackh! Well, yes, Nefertiti was also of the New Kingdom, but I meant to say that Nefertari were. My thanks to those who did not snicker.