The Daring & The Different

I have a genuine fondness for the DC comics of the 1967-74 years, a transition period of sorts between the Silver and Bronze Ages. The art and the stories were actually better in many ways than the Golden and Silver Ages, as the comics industry was starting into its 3rd generation of talent. Don't get me wrong though, the Golden and Silver years were raw, bold, colorful, and wonderful — with a huge nostalgic factor.

Below is a tribute by Nick Cardy, one of the 2nd generation artists that was at the top of his game during this period. I have bittersweet memories of this time, as it bookended my high school years into my army years, when I was still collecting as I could, attending early comicons and such, and seeking out my favorite creators to shake their hands. 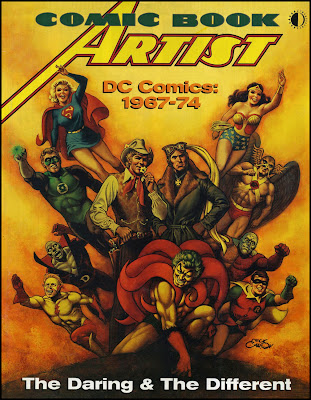 You're right, a lot of forgettable stuff, but even those things evoke nostalgia in me. But really, during that time I sought out ANYthing by Cardy, Joe Kubert, Neal Adams and Gil Kane, with a good dose of Curt Swan thrown in. And then some of the new artist guys were making great headway during this time, like Kaluta and Wrightson.

No one can draw Donna Troy and Dick Grayson like Nick Cardy!

AbsoLUTEly, ToB—any of the Titans, including um, um , what's her name—the redhead, um what's her name. I had a crush on her back in the day because of Cardy.
Um . . Lilith!!

Oops! My mistake! That was Irv Novick. What can I say? The two of them were brilliant.