A beautiful preliminary study by Mucha. . . 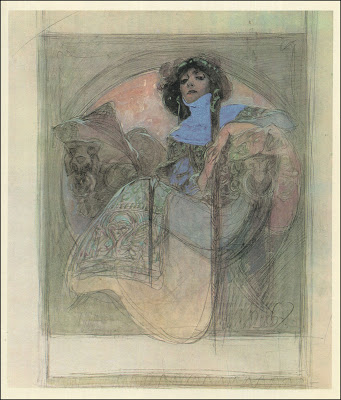 WOW, beautiful! Thats one I've never seen before! Where is that printed, or do you have the original?

Mr. Door Tree--I bought this piece as a quality print when I was a student at the Art Institute of Chicago way back in the late 60s, and have treasured it ever since. I would wander over at lunch time to a book store near the el, and drool over the art books and prints. I was big on Rembrandt then, but this Mucha called out to me. The print is of such quality that it feels and looks like an original. I saw this piece in a book several years ago, I'm trying to remember, I think maybe in a hardback auction catalogue.

I have another Mucha print, a simpler sketch, which I will post next. Maybe you've seen it, but it too makes a nice print.

Joe--It used to be uncool to admit out loud admiration for Mucha (back in the heyday of Warhol and such) but man, he has stood the test of time, from my point of view.

Kinsman of the Dragon said...

Thanks for this gorgeous print! Mucha will always be one my favorites. I've been to Prague a few times and I can't wait till they finally create the museum for his Slav Epic to get back there. (Never had a chance to see it in the Moravský Krumlov castle...). In the meantime, if you happen to spend your holidays in France, there is a huge exhibit in Montpellier at the moment with 2 pieces from the Slav Epic.

>It used to be uncool to admit out loud admiration for Mucha (back in the heyday of Warhol and such).

Really? For one not being there in 60's it seems that it was art-nouveau revival: most of psychedelic rock posters take roots in Mucha and similar designs.

There were different crowds with different aesthetics.

The psychedelic scene looked at a lot of this kind of art as funky, something to be toyed with, manipulated and transformed, which amounted to a bit of admiration. Those people were stoked and saw beauty through a purple haze.

But the art gallery crowd, the cocktail/coke crowd, the cultural elite had a deep prejudice against the old ways. Victorian artists that we admire so much today were dismissed as kitsch and the artwork could be had for a huge bargain, if anyone was even buying it.

I remember, as an art student at the time, laughter and derision, even from professors, if anyone admitted to admiration of the arts nouveau and deco.

Times have changed so that today there is an appreciating audience for just about every ism and artist.

Never saw that one before...a hearty thanks for posting! Wow!