Santa Claus is probably the most persistent modern mythical figure of our time. For 70 or 80 years now he has had a pretty consistent graphic identity, portrayed with standard characteristics. But as we know, it wasn't always that way.
Starting as a saint, mythical or not, his identity evolved with each succeeding generation or two, until he now seems to be a corporate entity. But nobody owns Santa. He's a public domain character. Yet, one corporation got his nibs to endorse its product endlessly, and by doing so, solidified his look, his character, his appeal to generation after generation. Yes, of course, Coca Cola.
But it was one artist, Haddon Sundblom, that was responsible for that feat. Starting in 1931 and the following 30 some years, Sundblom's paintings set the pace for all other versions. Before that . . . well, we'll get to that.
A comment came in the other week or so with this question:

I heard on TV the other day that Coca Cola developed the general picture of Santa that we all recognize - red suit etc. Do you know if this is true Thom?

and this was my response:

My understanding is that Santa's image was everywhere in the late 19th century—all the periodicals and tradescards and calendars and everywhere. His size and color of suits varied, but red was predominant.

And then Louis Prang, a Boston printer, introduced to America the English custom of Christmas greeting cards, and in 1883 he issued a red-suited image that sold well, and then he followed up with more in 1886, starting the standard trend toward the consistently red suit. By the 1910s and 20s, most but not all depictions were of the red suit and the 'general picture of Santa', as you say.

But when Haddon Sundblom painted his first Coca Cola Santa as we know him, starting in 1931, he refined details that did indeed become standard elsewhere.

Directly below is an example of Sundblom's iconic portrayal of Santa, and below that is a wonderful modern interpretation by Scott Gustafson, showing how the character is still basically the same, though with subtle modification.

On the bottom is an example of one branch of evolution that has persisted into our modern times, with some people yearning for the more 'natural' character of 'Father Christmas'.

Next post we'll look at some of the old-time portrayals of the old guy. 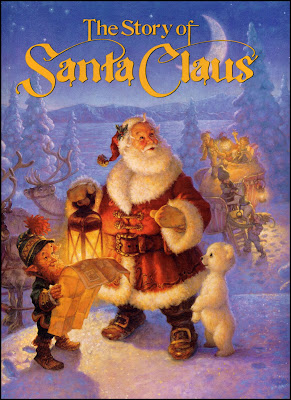 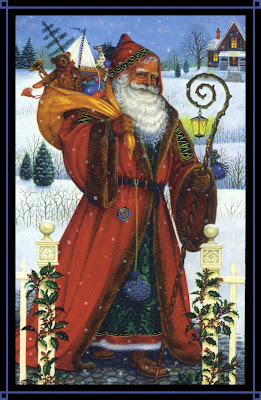 Hi Thom,
Thank you for the bit of history, and the images!