It's an old message (from 1944), yet it's still appropriate all these 65 years later.
And here's wishing the best for our G.I. Joes and Janes to be out of harm's way (believe me, I know it's going to take a lot more than wishing). 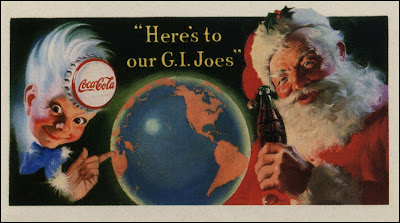 I heard on TV the other day that Coca Cola developed the general picture of Santa that we all recognize - red suit etc. Do you know if this is true Thom?

My understanding is that Santa's image was everywhere in the late 19th century—all the periodicals and tradescards and calendars and everywhere. His size and color of suits varied, but red was predominant.

And then Louis Prang, a Boston printer, introduced to America the English custom of Christmas greeting cards, and in 1883 he issued a red-suited image that sold well, and then he followed up with more in 1886, starting the standard trend toward the consistently red suit. By the 1910s and 20s, most but not all depictions were of the red suit and the 'general picture of Santa', as you say.

But when Haddon Sundblom painted his first Coca Cola Santa as we know him, starting in 1931, he refined details that did indeed become standard elsewhere.

I will be posting some interesting images of Santa over the next week, and will expand on what I've just said here.

during the war when I was in North Africa my dad sent me a bottle of coca cola- I was offered $10 but refused it. That really tasted good.--it was nearly a year later we got it at the PX--charlie

Lifting a glass from my safe harbor to all those G.I. Joes that keep me and have kept me safe.