Going through your deceased parents' possessions can be an amazing trip through time, a way-back machine of sorts, without Mr. Peabody and Sherman. My parents weren't packrats, per se (okay, maybe my mother was to a certain degree), and so much stuff has been lost over the years, due to flooding and some mysterious 'leave-home-quickly-at-midnight' scenarios I had to go through as a kid.

But I'm still going through a fair amount of stuff that my mom left behind as she made her final mysterious journey (she passed at noon, on the dot, the day that I told her, while she was in a coma, that I had to leave at noon that day and wouldn't be back till much later that night), so that I was with her at her last breath. But I digress.

My parents divorced long ago, yet my mom still had a number of things of my dad's that I'm now slogging through. I don't want to miss anything that would shed light on his early years, so piece by piece I sort out old receipts and work detritus from interesting photos and memorabilia.

One photograph that slipped out from some newspaper clippings is one I hadn't seen before. It was a tiny little thing, probably a contact print from a small negative. I squinted to see any detail, and not having much success, I scanned it at 1200dpi and was delighted to look in on my dad in early WWII uniform with the WWI style helmet. He's the cocky young smiling chap to the right, in the image below, looking aMAZingly like I did at his age (he was 18 in this shot in the South Pacific—He lied about his age when he joined the army at 16 years old). So he's a corporal here, and looks fearless as he begins his deployment in the Pacific theater. It's like my scanner was a time machine window, looking back in time. It's fun to look forward to more photographs of that sort, still to come. 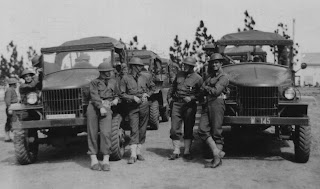 So, in the same box was this souvenir coconut, coming up on 70 years of age, and seeming quite pristine for its travels. As a kid, my family left homes in the dead of night, and yet this moonlit gal must have gone with us every time. My mom had said that she lost good silver and packets of letters on those  great escapes, and yet this coconut made it all the way to the future. Do you think there's a market for this kind of momento  on EBay or such? I don't want to keep it, but I'm sure not tossing it into a landfill. 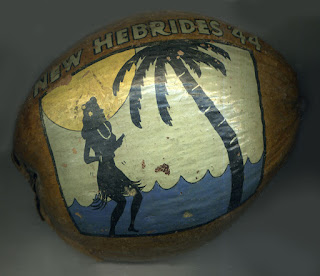 And then there was this copperish tin can, below, that was sealed tight with a lid that wouldn't budge. Something made some clatter when I shook it, but it wouldn't open up. It looks like an old K-ration can, but what amazing thing could be inside? My wife was thinking maybe it had some ammo or explosive gimcrack from the theater of war, and I pictured maybe currency from one of the number of islands that my dad waded ashore to help liberate. Whatever it could be, I thought, wow, this is truly a time capsule, and my curiosity made me try harder to pry open, which I finally did.

HA! There were SOAPS knocking around in there, still smelling fragrant and fresh, and a set of nail clippers (!?). World War II vintage souvenirs. I was slightly disappointed, hoping it would be something that could help put my daughter through the next two years of college, but still delighted in getting to know my young parents a little bit more as I delve into these boxes. 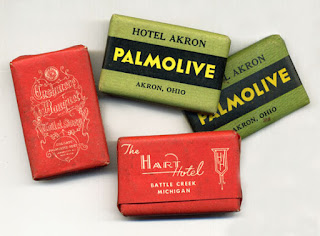 It's funny how an 18 year old kid can suddenly look like a man when you put him in a uniform.

When I started basic training, I went in with a bunch of long-haired baby-faced boys (me too, I guess). One buzzcut and uniform procurement later, I was training with a bunch of men.

I hope you keep the coconut, Thom. It's been a part of your family so long, to get rid of it now is almost akin to child abandonment. If you give it away or sell it, one day you'll miss it. It can't take up much space, so keep it as a memento of your parents. It must have meant something to your Mom if she went out of her way to make sure it accompanied you on your moonlight flits.

Inspirational. Informative. Fascinating. Emotional. Can you tell this is a comment from a female? My Dad burnt everything he had saved. I used to pour over albums for hours looking at his treasures from the Aleutian Islands where the only weapons they were issued was a knife and a garrot.

Fascinating to see everyday items from those times - the soap packets - still with their original vibrant colours. It's tempting to think of the past as muted or sepia, as that's how it's often shown.

Hi Thom,
Thank you for sharing your photographs and mementos.

Annie, thank you and other friends for taking any interest.

All of us and our parents have tons of stories to tell. I'm grateful for this venue, that maybe it somehow ends up in the great digital archives of the future, gigantiajilliongigabytes that it will be. Of course all it takes is one nuclear pulse to send us all back to the Stone Age,and the I'll be painting my stories on cave walls.=:0

The Hart Hotel in Battle Creek Michigan is diagonal to the Hart-Dole-Inoye Federal Center, a military facility, which was the Percy Jones Hospital in WWII. Also, it was less than a few hundred yards from the famous Battle Creek (Health) Sanitarium started by the Seventh Day Adventists. Also in that very area was Ft. Custer, a WWI and WWII troop training center. Battle Creek was a very popular and thriving place during the Edwardian, WWI and WWII times, though has seen significant decline since the 60s.

Oh, and a very large (for the time) VA Medical Center as well.