A Magazine for Adults

I remember being obsessed with The Spirit when Harvey Comics published two issues of reprints back in the mid '60s, bringing the stories out of retirement for a new generation. Seeing those and the one reprint story in Jules Feiffer's book, also of the mid '60s, made me crazy to want to see more. Well, of course nowadays all the Spirit stories have been reprinted in DC's archive series—yay.

Back in the '70s, Kitchen Sink Enterprises brought the Spirit further out of retirement and into an "Adults Only" version, which was only very mildly spicy. I bought those at a headshop as beat up dog-eared copies. Then one day in the '80s there appeared a notice somewhere that Eisner was selling file copies of his later comics. I sent in an order for the underground issues along with a praising letter to Eisner. I received back mint condition copies, autographed on the inside, and a personal thank you note from Eisner himself.

Never be afraid to let your heroes know that you appreciate them! 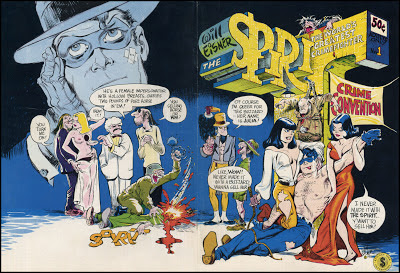 Very cool. My first exposure to The Spirit was the Harvey reprints of the mid-60s, which also had some new material.
When I upgraded them from my dog-eared coverless copies, my new copies were signed by Eisner, much to my surprise. Not the same circumstances as yours but still a treat!

One of the VERY small number of vintage Spirit Sections I have was signed by Eisner. Oddly, it's not actually one of his issues; it's by Cole.

Of the four I have, only one of them has Eisner art- although I have a generous selection of reprints. And the one Eisner one I have is the Plaster of Paris story, which is hands-down my all-time favorite Spirit story, and has been since at least a decade before I got that original section.

I'm not lucky enough to have my signed, but these Spirits are a treasured part of my collection. I love the heft of them, they feel like solid comic reads. the blend of old and new Eisner inside is delightful.

I was happy enough to have got a piece of e.mail from him. ;-)

My first exposure was in the volume that reprinted Jules Feiffer's article from Playboy. For me, as for you, that story reset my sense of what could be done with this mode of communication.

I met Will in Glasgow around 1986/'87 and spent most of the evening in the company of him and his wife. Came across as a very unassuming, modest man. He signed my copy of his Comics and Sequential Art book and put in a little personal message. (Still got the book.)

So, did you enjoy your time in London, Thom?