Here's a comic book I've been looking for, for years. I'm surmising that it never printed—at least not under this cover by Joe Kubert. Y'know Kubert did a few Black Cat stories back in the early days.
The ad below ran in November of 1993, for Black Cat #14. The following year there was a Black Cat: The War Years #1 that came out using the same mast head material, but a totally different cover rendering by Ken Selig. The Grand Comics Database doesn't list the comic in the ad, and comic store managers look at me blankly when I ask about it. Why in the world would somebody deep-six Kubert?!
Well, damn. I woulda really liked to have had this cool Kubert cover in color. Say that 5 times real quick—cool Kubert cover in color. 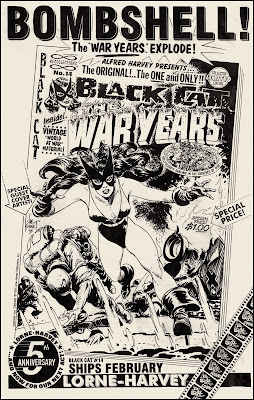 All I have to say about that is that I've never heard of Ken Selig.

Ken Selig did some editing and comic book covers for Harvey's Recollection imprint (some other Black Cat issues) back in the 90s and various art stuff for some Archie titles and such.

I have this comic, bought it off the stands. I like the really hectic cover that's on it by Selig, but I have to say this one is much better.

I never knew this existed. Thanks for posting.