I made it a point to come in contact with cartoonists whenever I had the opportunity. In 1972 I wrote to Johnny Hart and told him how much I enjoyed his B.C. strip, in particular the lunatic one that ran the previous week about the glass rooster. A short time later a very large envelope arrived in the mail with this original:

The original is 250% of printed size, with no white-out.
Anyone not around in the era of '72 may not realize that the recording of MacArthur Park was playing all over the radio incessantly, and was a huge hit for Richard Harris (Dumbledore for some of you, King Arthur for others). Harris had parleyed his success from the Camelot musical film into a mildly successful fame as a tough yet sensitive singer.
The joke punchline in the BC strip was funny at the time because "MacArthur Park is an unusually complex song for pop music. The song was first recorded by Harris on his album A Tramp Shining, in 1968 and was released as a single. It was an unusual single, running for more than seven minutes, with a long, climactic orchestral break."
So anyway, that's the basis of the joke. Well . . . you kinda had to be there.
You can listen to MacArthur Park by clicking here. 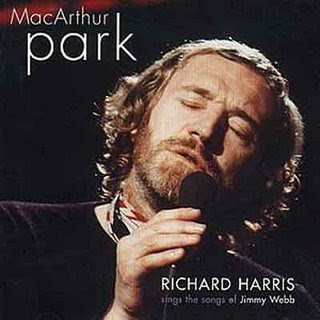 Posted by Thomas Haller Buchanan at 7:05 AM

Yeah, MacArthur Park is a weird piece of pop music history. You had to be there. People who weren't around then just kind of scratch their heads and look at you funny when you bring it up.

It's getting harder and harder to find people who have shared similar experiences of my earlier life.

I enjoy reading those fiction pieces of people who are immortal, and how they deal with the heartbreak of the coming and going of cultures and the people they care for. I AM a different person than I was in 1972, having already left a lot of people behind in the stream of time. Being an immortal in a world of mortals would be quite a trip, to say the least. If you weren't careful, there could be a lot scratched heads as you talk to people. Oh well, I do digress and only a problem in fiction.

DJs used to play “MacArthur Park” when they wanted to go to the bathroom or dash out for a cup of coffee.

And enough time for a smoke as well.

I saw Harris debut the song on an episode of "The Mike Douglas Show" in 1968. I was a huge fan of the composer Jimmy Webb and followed everything he did. The song was a big hit in '68, but I'm not aware of any resurgence in the song's popularity in '72. Donna Summer covered it in '78 and it was once again a hit.

Hart's mention of the song can probably been viewed in a wider context, as "MacArthur Park" became a standard joke for any overly-long, pretentious piece of Pop music.

You're right about the wider context and that '68 was its biggest year, but by '72 it had become a radio playlist standard, at least from my personal experience. I remember specifically in '72, cuz I was in the army, traveling in several states, and my only form of entertainment was the radio and I switched stations a lot. MacArthur Park played every couple of hours, along with 'Bridge Over Troubled Waters', 'Nights in White Satin', and others that had been out for a long time. Like I say, by then it was a standard, and then gradually died away before Donna Summer gave it new life.

I remember when it came out and if I recall correctly, the 45release was a bit unusual because of the length of the song. Typically they didn't go past three minutes or so.