So You Want to be a Cartoonist

In my early years after high school I wanted very much to be a cartoonist. But I couldn't focus. I was infatuated with the notion of being a comic strip artist or a gag cartoonist or a comic book artist. Ya just can't be all three, or at least not all at once. But I sent cartoons out to the New Yorker and SatEvePost, a strip concept to a couple of syndicates, and some sample pages to DC comics.
Well, I got a pile of rejection slips (geez, I was only 19), but the nicest rejection I got was from Julius Schwartz, top editor for DC comics, for my Superman story. I had sent a properly typed story, with panel breakdowns and a couple of inked pages. I received a really encouraging letter from Schwartz along with a photostat (anybody remember those?) of cartooning tips by Joe Kubert, which was also showing up in print in comics at that time.
Cartooning is a very difficult sport, but if I'd stuck with it I may have made a name for myself, somewhere, somehow. As it was, my number (50) came up for the draft, wherein I joined the army. I was placed as an illustrator (Military Occupational Specialty: 81 Echo), where I learned the trade on a fast track, starting as a combat artist and graphic journalist.
Subsequently, as an illustrator for 40 years, I got to draw a few cartoons along the way, but nothing like I once dreamed of.
I admire all of you professional cartoonists and all the work (and focus) that it took to get where you are. 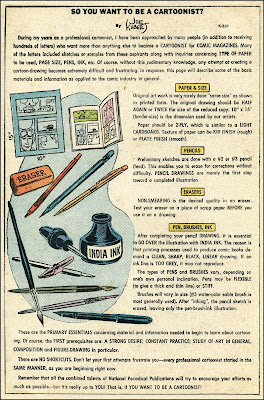 Above is the page that saw a lot of print, but was also sent out, from DC, to aspiring cartoonists. I think this was just prior to the founding of Kubert's school of cartooning.
Posted by Thomas Haller Buchanan at 6:39 AM

You're not alone. I am a writer and an illustrator, so you think I'd be able to produce a story told in comic panels.

Nope. Just can't get the hang of it. Either I use too few pictures or too many words (or vice versa). Can't seem to find a balance between the two.

Plus there's just the day to day flow and continuity of style and wit and purpose. Ya just got to hit the mark all the time. I think I could turn out some really great panels, if I could take 6 months for each one (well maybe not quite that long--but I wouldn't be able to make a living at it).

Yeah, that's the same with me. The panels I would do near the end of a project would end up looking wildly different from the ones that I started with.