This Frazetta portrait of Flash Gordon and Dale Arden looks all the world like a portrait of John Carter and Dejah Thoris. But you can tell it's Flash by his cool headpiece and his monogrammed codpiece.
That's quite a halter that Flash is sporting and that Dale isn't. Apparently these two have gone native after the vanquishing of Ming.
Really nice drawing, except that it's unfortunate that Flash's left leg is lined up with Dale so that it looks like she's got a beefy thigh, bony knee and size 13 combat boot. 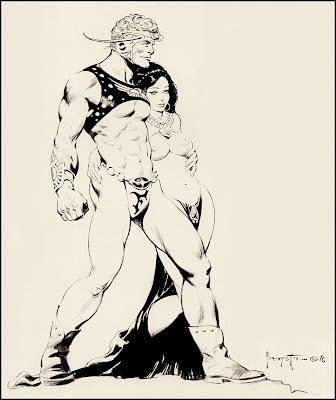 Okay, what's with this criticism of Frank Frazetta? Frazetta is a god at whose alter I worship. If he wants to draw Flash with a halter top, he can do that. He's Frank freakin' Frazetta!

Okay, maybe I get a little worked up about this. And you've got a bit of a point about the leg... a bit, though. Not like, a lot or anything...

Okay, I do get worked up about Frazetta, but he's just so damn good!

I knew I'd rouse some rabble when I wrote that. I think it took a lot of courage on my part.

At least you didn't put a curse on me.

Perhaps Frazetta envisioned the image as colored, in a manner which would help the viewer to distinguish Gordon's leg from Dale's leg.

Yes, Flash would have his manly tan and Dale a delicate aristocratic paleness. It would be lovely in color wouldn't it?