A Long Way from Here, A Long Time from Now... 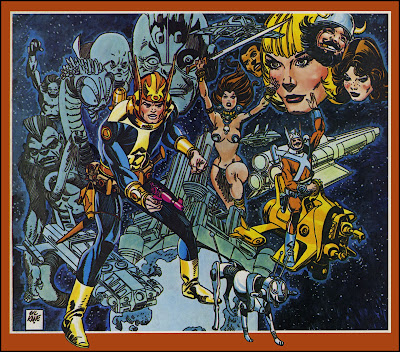 There is a long and fabled history to Gil Kane's comic book work. In my estimation though, his best work was on a comic strip—the innovative Star Hawks of the late 70s. Working on the strip seemed to bring his full talent to bear on his work, reflecting as well from his comic book work during and after the strip's run. His graphic sense became sharper and even more dynamic than earlier. His architectural and perspective renderings were faultless and iconic.
I was working as an art director at an advertising agency in 1977, and three things stand out in pop culture for me in that year—someone running into the office shouting that Elvis had died, the first Star Wars movie came out, and the premier of Star Hawks in the comic section of the paper.
One reason that I took notice of Star Hawks was that I had a comic strip of my own running just below it on the page. . .*blush* . . . well, okay—it was my advertising artwork, masquerading as a comic strip for various clients. As I trimmed my ad comic as tearsheets for the client book, I also trimmed Star Hawks for myself from the first day it premiered.
I ended up collecting the entire run, looking forward to each day's new strip, until one day it disappeared from the paper. From that day, the comic section seemed dull and gray, until the day that little boy and his imaginary tiger friend showed up.
I traded off that collection some years later, just before I acquired my first scanner—sigh. So I don't have a full run anymore, but I did keep a number of duplicates, and those I'd like to share with you.
Kane's two-tiered dailies were unique and innovative to the comic section, and his art was, and is, just stunning. Remember this was in 1977, the year Star Wars—A New Hope premiered, and the strip had a lot of the atmosphere of that movie, but was not a copy or clone.
So here are the first seven strips of Star Hawks. Look closely at each panel to marvel at the detail and atmosphere that was an oasis of fantasy in the otherwise dull comic section, mine included . . . *blush* 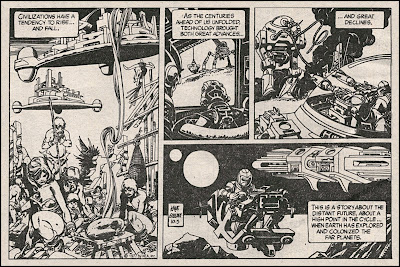 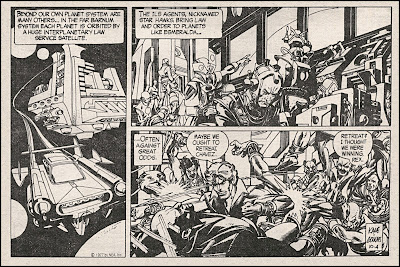 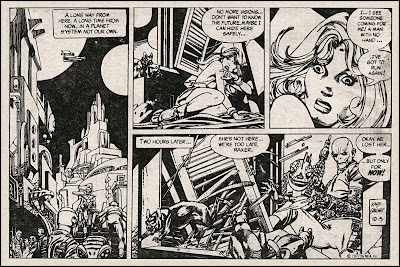 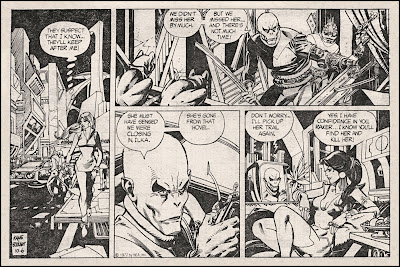 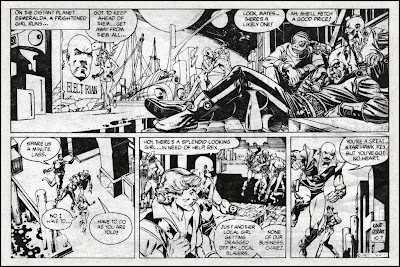 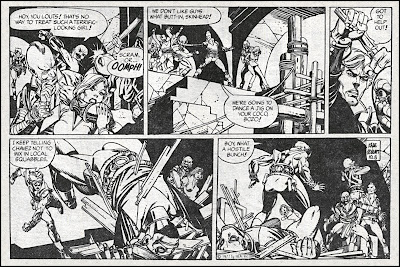 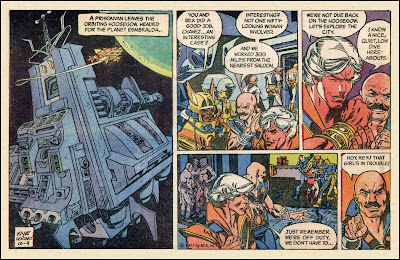 Below is one of a sheaf of promotional posters, printed on bristol that Kane carried around with him to sometimes draw on the blank back. Below that is the drawing of ERB's Dejah Thoris and John Carter, that I've posted before, that he drew for me as I watched, when I met him and spent some time talking. He had already been on the strip for awhile and we talked shop.
Coming up, I will be enlarging and highlighting panels from Star Hawks strips and see if I can pull together some memories of what we discussed about the strip. 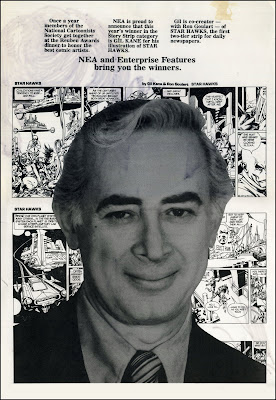 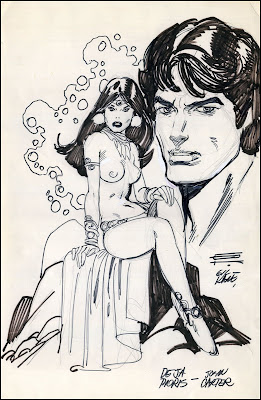 wow. I defy anyone not to fall in love with these. this was a great time for Kane, his work was never more accomplished. looking at these is seeing a master at the very top of his game. I don't like to play the X-artist is a way cooler artist than Y-artist game, but with Star Hawks Kane proved, without any doubt, that he will NEVER be bettered.

That's great artwork !
I just bought the collection on Amazon, I HAVE TO read this !

Wow, Thom! This is one of those semi-legendary pieces that I have been hearing about for years but have never actually seen.

Thank you s much fr sharing it like this. I didn't always love Gil Kane as much as I do now. I used to make fun of his infamous low-angle, up the nose panels, but this work is absolutely amazing.

STAR HAWKS never appeared locally but I used to read it in THE COMIC READER. Last year I picked up the 2 mass market paperback collections. It is impressive stuff!

As I said, the strip was like a jewel on the comic page, putting others to shame for not coming up to their potential.

A tiny corner of the paper felt like the 'adventurous decade' must have felt (of course not so coincidentally since it involved Ron Goulart).

As silly as it may sound, I wonder if Star Hawks did not enjoy greater success because of the amount of ink the dailies required to print each installment. Sad but true statement.

Kane was one of the best