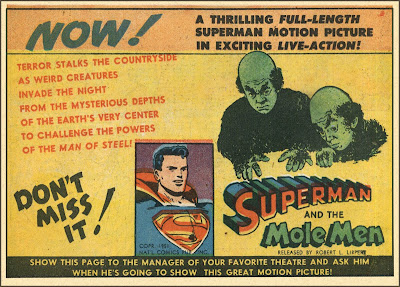 Above is an ad from a 1951 comic book promoting the release of the live-action movie that many of us older (but not real old) farts fondly remember from Saturday afternoon TV (remember the Tarzan movies on Sunday afternoons?).
Ten years earlier, the Fleischer/Paramount animated Superman series debuted in September of 1941, with 17 cartoons touring the nation's theaters over the next 2 years.. The plug below is from the middle of a Newsboy Legion story by Simon & Kirby in 1942. 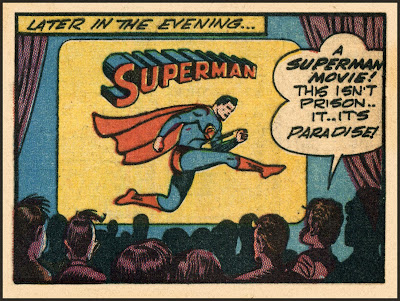 Elsewhere in 1942, Clark Kent himself gets a rush out of the cartoon: 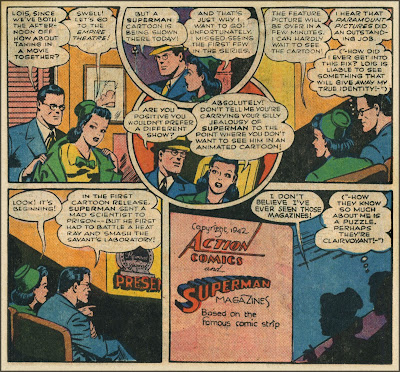 That copyright notice on the screen is a bit amusing, given that a failure to include proper copyright notices threw the series into the public domain (which, in turn, provided cover for Fawcett in its struggle against National Comics Periodicals).

The Superman Mole Man movie used to scare the bejeezus out of me when I was a kid. It's the scene where the Mole Men are gazing in the window at the little girl, that's creepy!

Love this flick today, lots of fun. And the point of view flying is different and not repeated anywhere that I can think of. Maybe in the movies, but I'd have to check.

Wouldn't you expect The Mole Men to have flattened heads, instead of elongated heads? I mean, wouldn't they evolve to move around underground a little more easily?