Kevin Nowlan brings a certain je ne sais quoi to his comic book art, even after decades in the biz. Nowlan has a blog with a subhead that says: "started with the best of intentions, but like most other efforts, doomed to perish from neglect as soon as the novelty wears off." Currently his last post was on April 14, so possibly the novelty is thin, but check out his older posts anyway—good stuff. I enjoyed and collected his work way back when: 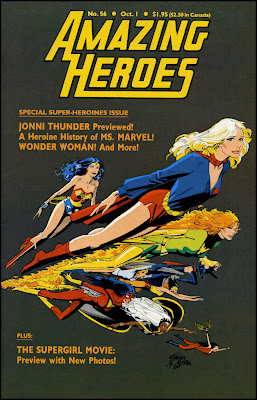 His feminine faces are gorgeous!

Thomas, he is indeed good on the feminine form, especially the often harder art of getting their faces just right, (in an often Gates McFadden kind of way), without making them all look the same - then using a different hairstyle to pretend they don't - but surely his most underappreciated art's his skill at augmenting the work of others.

Some comic artists - perhaps only unconsciously - fight with the work when it's started by another, or go out their way to underline which is their contribution and which isn't.

In Batman: Sword of Azrael, though - for me, at least - Nowlan went out of his way to ravish Joe Quesada's weird impossible vistas and perspectives, (unless human eyes've suddenly sprouted a wide range of movie camera lenses), to a degree that, years later, when I'm still hungry for an artistic fix, or just want to get my artistic juices going, I pore over those comics and just gaze in silent astonishment.