Some sort of gremlin got into the machinery, the other day, here at The Pictorial Arts, and dropped out a published post featuring some Alley Oop pages. I'll repost them some other day with more pages added to em, once I pinpoint the gremlin in charge.
In the meantime, let's see if this portrait of Oop sticks around. 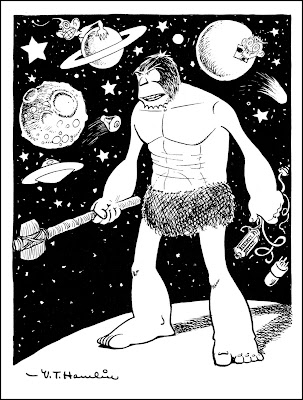 VT Hamlin — Oop promotional drawing — 1961
(I think it's that gremlin hiding behind Saturn)
My biggest regret about losing the post was that the comment went with it—from 'charlie', our blog friend who in his 90s just celebrated his 65th wedding anniversary and informed us that his cancer is under control, and is doing relatively well. charlie is a huge fan of Pogo, Alley Oop, and all the great comic strips of the past, and it's always a pleasure to hear from him.
Posted by Thomas Haller Buchanan at 9:27 AM

Glad to hear about Charlie, sorry I missed the post. I look forward to seeing the post re-born and hearing Charlie's input!

Alley was an early favorite of mine in the early sixties. I had pretty much forgotten about him until recent years when I grabbed up all the reprint books, mags and internet scans I could get my hands on. Amazing stuff! Literal "bigfoot" cartooning matched with an engrossing narrative with elements of sci-fi, adventure, history, romance and a general light-heartedness. Wish more people could get to know Alley Oop!

Steven, you expressed that very well.

Just to reiterate, the graphics and the narratives were perfectly balanced to be totally entertaining. There are times, even when I reread some of the strips, that I laugh out loud, and that is REALly rare for me with comics.

Hi Thom,
I'm glad to hear Charlie's good news. I'm always happy to see a comment from him, and return comments from you.