202 years ago tonight, the body of Thomas Paine lay on a mortuary table awaiting a funeral that only six people would attend, due to his arguments against institutionalized religion and Christian doctrines.
Yet this was one of the fathers of the American Revolution. It was said of him by President John Adams, "without the pen of the author of 'Common Sense', the sword of Washington would have been raised in vain."
Below, a dynamic and colorful depiction of Paine, in the act of creating the pamphlet's passionate propaganda, using clear and concise writing — intelligible to the average reader — arousing and spreading resentment of Britain's rule, offering a solution for the threat of tyranny. 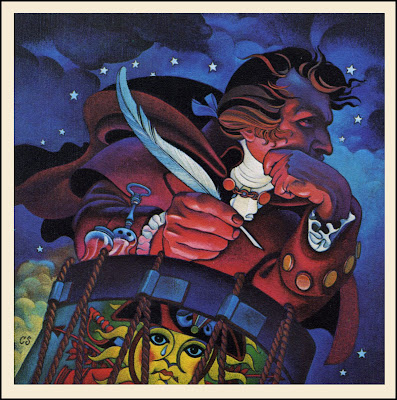 along with William Godwin's Enquiries Concerning Political Justice, Paine's The Rights of Man forms the backbone of a belief system that has stood with me, and only grown stronger over the years, for the whole of my adult life. Paine was one of the great social thinkers of his age, of any age.

and that's a great picture.

We get to know a bit more about you!

This is a strong illustration, hopefully in a kid's book, because it is engaging.