Well, here I am again, and barely. I am not finding closure with my computer woes. After handing over my beloved computer thrice to the Genius Bar, I have to go in for a fourth time, for the exact same problem as the three times before. I've only got a few days left on my extended warrantee and I fear that I'm being stalled until my time has expired, and then it's "whoops, too late sir, maybe it's time to buy a new computer". And perhaps it is time, as I am losing credibility with my clients and cannot afford the long terms of holding my machine and then not returning it in working order.

I've been able to limp along between screen freezings by saving my work every 30 seconds or so and then, sure enough, sooner or later, wtf, it's done it again. And when I reboot, the screen jiggles and wiggles and gives me the razz.

Well, all this whining is to explain . . . once again . . . why my posts are rare-ish, and why there won't be many this coming week . . . no comPUter! I love my Mac, but the customer service has been lacking  and was even rude to me when I last picked up my machine.

I believe in the spirit of Apple and Steve Jobs. But sometimes I feel like demons are gnawing on my bones. 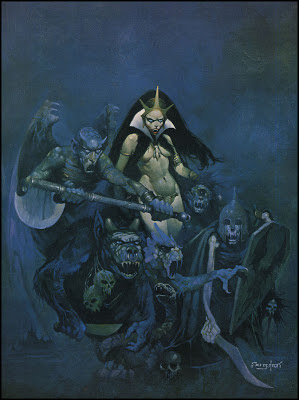 Beutiful chosen art piece you have to day!!Myh ohh myh!!!

I had a remarkably similar experience with an Apple warranty: three or four trips, and the problem was never solved. I've been an Apple buyer since the Apple IIe, but my loyalty is gone. I'm typing on an Asus Transformer now, and while I'm still using an Apple desktop machine, I may move to another OS when it's time to replace that.

I don't understand why they don't just give you a new computer? I haven't had to deal with the 'genius bar' yet, but I think I much prefer the method dell used to use where they just mail you a new computer and then you mail them the broken one. I think the gb was founded on the idea that computer users are extroverts. I've got no desire to travel to a store to talk to folks in person.

Yes, it's incredibly frustrating. I'm a hit man for The Brownies - want me to come over and sort them out?

Seriously 'though, I think you're spot on about them stalling 'til the warranty runs out. At the end of the day, they're only interested in your money, not your satisfaction. If you do get a new computer, perhaps you should try a different brand. 'Vote' with your cash.

Much sympathy to you. I would have to agree, though, that if they cannot repair, they should replace your machine, since you are under warranty. Insist, and take it up to higher levels, as many as are required- a pain, I know. At this point, they should give you a new computer; and if not, under no circumstance, can they say the warranty has lapsed, since they are still working to repair the initial problem. Good luck...

Thanks Kid, I know what you're saying.

Annie, thank you, that is precisely my point of view. I feel somewhat 'righteously indignant', as my father used to say. I will proceed with calm, dignity, and confidence through whatever channels I need to.