Many a time an artist under deadline or other pressures finds the need to 'resource' an image, basically stealing it, for composition, poses, or 'authentic' details. Many of the great illustrators of the past had the financial resources to hire models, pose, light them, etc, as well as spend time at the museum or riffle through old National Geographics to steal images as well.

I confess that I've appropriated images more than once, and quite blatantly, as I faced a deadline and couldn't begin to think of using models. I do make efforts to transform the stolen images into something new (I especially recall painting a mural for a museum depicting an Aztec battle skirmish, showing men wounded and falling in action, where I used photographs from Sports Illustrated that showed tennis players flinging themselves around the court in agony, anguish and tantrums as they fought to win at Wimbledon).

Anyway, it's a time-honored tradition for artists to steal from the best, which is demonstrated here, as pointed out by Ken in the previous post, wherein the bottom image of Wally Wood and Joe Orlando is appropriated from an earlier painting by Dean Cornwell of an ancient slave auction. The resemblance is unmistakable even as we see that little changes were installed as well.

Fascinating to see the source, and thank you Ken for recognizing the similarity to the painting so precisely that was displayed on Armand Cabrera's interesting blog (Art and Influence) which you can access here. 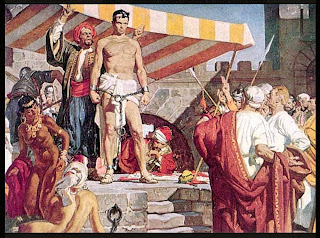 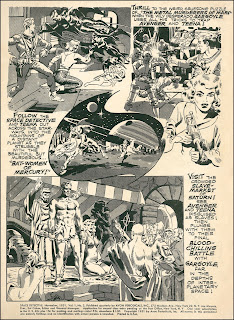 You won't believe it, but I am writing a sci fi short story set in a Mars colony entitled 'Slave Auction.' If I ever publish it, I'll acknowledge your post and the fact that I had to look up Space Detective, 1951.