The late Joe Kubert had probably the record for the longest career in comic books, from the early days in the '40s to just recently. His art style was highly distinctive all that time, though it did evolve consistently. The quality of his style took a leap upward in the early '50s, seemingly quite suddenly. But the first item below seems to be a 'missing link' in his evolution. It has hints of years to come, while still showing youthful experimentation. Even his signature is experimental, rarely used elsewhere like that.

This was an inside front cover for Avon Periodicals, a publisher with a propensity for assigning the best artists to create pen and ink illustrations to 'draw' readers inside the comic, assuming the cover also did its job. As the samples further below showcase, many of those inside covers were by Everett Raymond Kinstler, an illustrator in the making, and Wally Wood with Joe Orlando—two of the most compelling comic book artists of the 1950s.

All of these gentlemen were helping to keep the Golden Age of comic books alive as long as possible, until smothered by the oppressive Comics Code Authority. 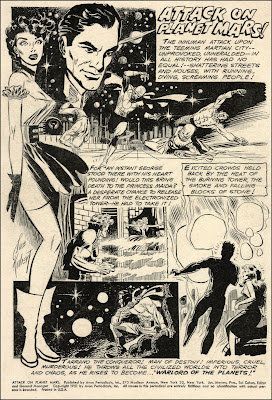 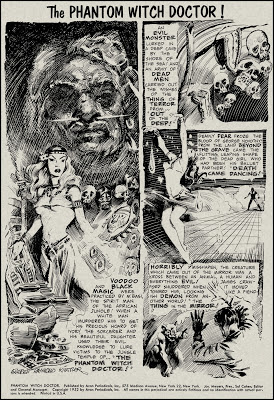 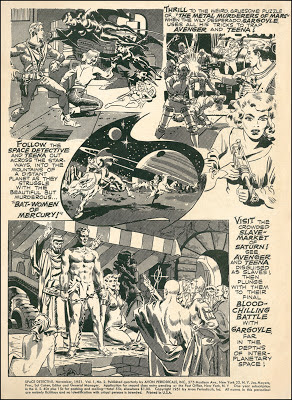 Posted by Thomas Haller Buchanan at 12:36 AM

Wonderful pages! Thanks for sharing!

Re the Wood/Orlando (bottom vignette,
the one of the slave market)). See the
first illustration in Armand Cabrera's blog
entry for 4th November, 1012. It's not clear,
but that seems to be by Dean Cornwell. At
1east, he's credited in the footnotes.
Cross-fertilisation!
BTW, commiserations on the computer problems.

Nice spotting, Ken! Absolutely correct on the reference source of that illustration. I will post the Cornwell image next post. Thanks for the connection!

I've seen Kinstler swipe from Dore, and here, from Dali.