The character of Batman has been drawn by a plethora of artists and interpreted in a multitude of ways. Yet it all started with Bob Kane, though quickly he became more of a publicity hound as other artist and writer ghosts toiled in his shadow.

Still, among a number of brilliant Batman artists, it is this somewhat crudely drawn image by Kane that set the tone and manner for the best interpretations to come. Early on, Batman was of a gothic manner, here looming over a gothic manor, and ventured into mystery before turning his full attention to thugs and gangsters and the occasional alien or two. 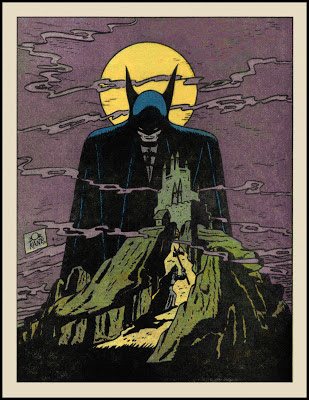 Neal Adams did a lovely 'homage' to this cover with one he drew for a 1970s Batman story, 'The Demon of Gothos Mansion'. It's on my blog somewhere in the September or October posts, I think.

It's interesting that Bob Kane could never quite understand that Batman was 'bigger' than he was. I read his autobiography (reputed to have been written by or with someone else) and he comes across as quite an unsophisticated, almost childlike (but not in the best way) person. Those that met him at conventions seemed to come away disappointed. Shame, really.

Hi Kid! Yeah, I did a post on that Neal Adams cover just about one year ago, comparing it to Kane's cover for Detective #31, which was slightly different from the version presented here.

Kane was a fortunate man, being in the right time and place and making the right contractual deals that he was able to be a better playboy than a cartoonist.

If you've not seen The Bat (1926), then I strongly recommend that you do so, because I believe that it influenced the early visual style of the Batman more than I've seen noted. (Other ways in which it seems to have been an influence have been noted frequently.)

I will look for it. Thanks Daniel.