Look out, here comes Mr. Snarly again:
Comic strips! Don't get me started about the huge gulf between comics of yesteryear and those of today.
Picture this. 1942. We're committed to a war. A world war. We've got paper shortages as well as all kinds of other things. People are distracted and harried. Everyday is a matter of life and death. But the newspaper editors know that comics are important to general morale. Heck, some people buy the paper JUST for the comics. The artists, the editors, the pressmen—they all work hard to bring a quality product to America's living rooms, knowing full well that the papers will shortly be out the door and into the neighborhood paper drives. People are even donating comic books to be recycled fer cripesake. They're gonna make cardboard ammo boxes and weapons manuals and wads for blanks used in training exercises. Newspapers in the door one day, gone the next. 2 cents, 5 cents, 10 cents for a newspaper. Read it, bundle it up, get it out of here to help the war effort. Nobody collects comics, you read em, you move em on.
Yet, cartoonists gave it their all. They loved what they were doing, and people loved what the cartoonists were doing. Look at this 'run-of-the-mill' Sunday strip (minus the glorious color of the times) by Frank Miller (the original Frank Miller). Disregard the racist characterizations (this was the hard and vicious enemy, for heaven sake). This was entertainment with just lines on paper. This was just one page of a large section of cartoonists giving their all.
Comics today . . . phh . . . don't get me started. 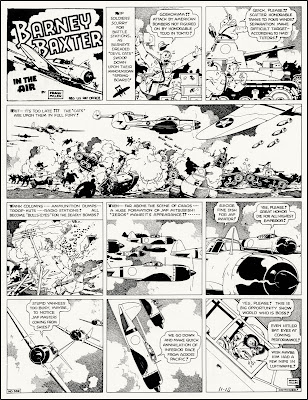 Take a closer look at that 2nd tier panel. What a beautiful composition.

Okay, we've looked at it. Now let's throw it in the recycle bin.
Posted by Thomas Haller Buchanan at 5:21 PM

Gorgeous. Wonderful. Wonderous! Look at just about any strip from the 30s and 40s -- wonderful work.

I don't think, however, that it's a question of cartoonists not giving it their all. It's really more that the nature of the beast has changed. More and more newspapers are running smaller and smaller comics, and no one is interested in adventure or continuity strips. I'm sure the world is filled with artists who'd love to do them, but there's no demand.....

Hi Thom,
This comic is akin to a series of panels for a graphic novel, with variation in level of detail and changes in perspective.