I'm tied up all day Friday in a meeting, so I'll upload tomorrow's post tonite.
Two posts ago, an anonymous commenter asked (I think he was asking) if I know of Gustave Doré, the outrageously prolific illustrator of the 19th century. Well, yes of course, most of us know and appreciate his amazing illustrations for some of the great classic books, including the Christian Bible. And of course I knew that he teamed with various engravers to bring his art to reproduction in the early days of mass printing, line work being necessary to create mood and atmosphere.
But I sort of thought Dore pencilled it in loosely, and the engravers took over, like modern comic book pencillers and inkers. But actually, I guess, for the most part, the engraver slavishly translated Dore's finished paintings to line work. But his paintings are rarely published.
However, here's a painting that we can line up with its engraved result. It's fascinating to compare them, to see how the engraver was faithful, and where he altered little things—including adding different little figures across the way on the far steps.
I would pay dearly for a coffee table book of Dore's full color paintings that we're so familiar with in black and white. 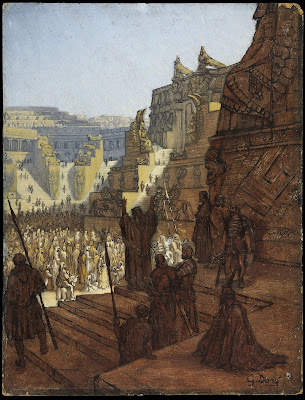 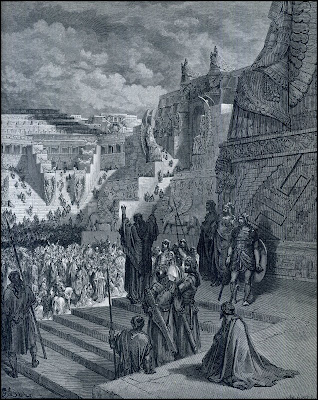 Hi Thom,
I love coming into your blog and learning something new. I'm familiar with many of Dore's engravings, but not the engraving process, and the fact the artist and the engraver are not often or always the same person has just sunk in. In comparing the two, I do feel like the engraving is the finished work, and that the faces in the engraving are more detailed and expressive than in the painting. There are also aspects to the painting to enjoy over the engraving, and of course, the concept and the scope is Dore's. It's wonderful to have the two of them to compare. Do you have more to post?

I've got a few more Dore paintings, but I need to search to see if I have the engraving counterparts. If I can't find them, I'll probably post the paintings within a fortnight.

Thank you for this comparison! Really interesting. As for Dore paintings I immediately think of his Andromeda. I think Bourne did most of his engravings?

This is lovely. I saw an exhibition of Dore's etchings a few years ago. They were breathtaking in real life. I can't imagine an exhibition where the etchings and paintings were juxtaposed.