Oliver Herford has been called America's Oscar Wilde. He was a humorist illustrator, cartoonist and writer, creating primarily in the early 20th century for magazines, children's books and such. This page from Life, the humor magazine, is an editorial cartoon that probably made even more sense back in its day of 1922.
When asked what his loftiest ambition was, Herford answered, 'I've always wanted to throw an egg into an electric fan.' A man after my own cart. 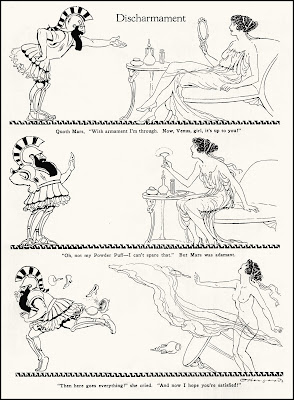 Ah! There was a bit of dialogue in film starring John Wayne, when he was still a B-movie actor, where a waiter asks Wayne's character “What's your pleasure?” and he replies “Throwing eggs at an electric fan! What's yours?” (My quotations may not be exact, and I cannot remember which film this was.) Now I learn that this wit was cribbed and from whom! Thank you!

The joke in the Life cartoon begins in metaphor. At the time, there was an international movement to get the great military powers to reduce their stock of weaponry, towards the end of making the world less war-like. Ships were sunk or torn-apart, &c.

I think that the remainder of the humor is fairly obvious to the modern reader.

Thanks Daniel! Hey, I'd like to see that film.

I recall Wayne once telling a waitress, "I'd prefer three eggs and an electric fan but since that's out of season, I'll have a cup of coffee." Wish I could find the movie and verify that. Cheers