Say what you will about the Disneyfication of classic children's stories, Disney's production concept artists were tops in their abilities to evoke mood and atmosphere, as well as giving credibility to fantasy.
Some years ago I did a minor amount of design and artwork for the Disney people involving Bambi, and received an invitation to a reception, and that invitation had this watercolor image on the front: 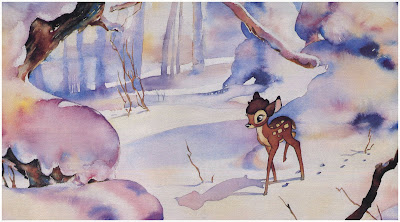 Later, I clipped the image below from a daily newspaper. You can see that it's the same image, with less cropping, and yet has not only a different color palette, but a subtler rendering to it. Examples of how the same basic artwork can be used to different effect. 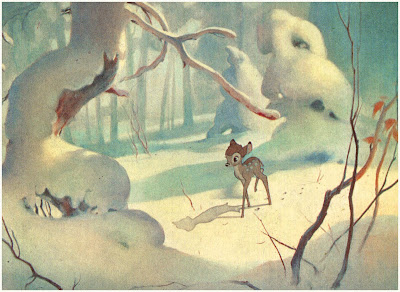 Beautiful - definitely prefer the softer, moodier colour of the newspaper image.
Thanks Thom, for the steady stream of inspiring pictures.