'Brahma,
says Hindu tradition,
created the Universe from a golden egg.
First he made the waters and in them put a seed.
It grew into an egg, which Brahma split open.
From the golden half came the heavens,
from the silver half, Earth.
From the egg came all creation.' 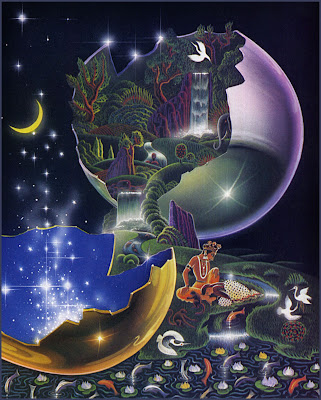 If I were given the above passage as an assignment for an illustration, I don't know that I'd feel it could be captured in a small rendering . Yet it was, in an elegant solution from an artist that, I'm sorry to say, I haven't yet identified—since the image was floating around in my image morgue.
Posted by Thomas Haller Buchanan at 1:18 PM

Hi Thom,
I tried a key word image search and all I could find were different images, and a few uncredited tiny sizes of this one. It's beautiful, and I hope you find your artist.

Woah! Time warp! I remember this from my childhood. I think it may have come from this book (note the cool Berkey cover). I believe it accompanies a chapter about different culture's cosmogonies. Lots of cool illustration in that one: Roman gods, planetary cross-sections, moonscapes, space stations.

Yep, that's gotta be the one. That's where my post material on Michael Whelan's planetary gods came from. Check him out on the labels over there on the right.

As I do many times, I took a beat-up old book and sliced it up for the image morgue. I know a lot of people have that book. Maybe someone will kindly look up the picture credit for this one.

Oh, wow. Yep, the Whelan Gods are from that book. I haven't seen those in 20 years. I looked at those so much as a kid I'm sure I wore the ink off the page.