Here is another 1930s line drawing that 'translates' a Japanese painting for a children's book, and below it is the original accompanying caption. 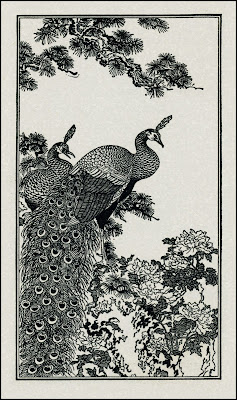 Peafowl and Peonies
Love of such beautiful things, of birds and breezes, flowers and trees, moonlight and starlight, is seen in Japanese paintings as well as in their charming little tanka poems of thirty-one syllables and the tiny hokkus of only seventeen syllables. The early poetry of Japan, however, was spirited and war-like in contrast to the peaceful poetry of early China, indicating an essential difference between the two peoples. "The Japanese," said their countryman Yo-ne No-gu-chi, "were from the beginning both poets and warriors."
The internet is amazing. As I was preparing to post the above drawing, I thought I would see if I could find the original painting. The drawing and caption are from a book eighty years old and identifies the painting being at 'Boston Museum'. I googled the museum and within two minutes I'm looking at the painting (albeit low-res). So to compare (and to see that the book's drawing cropped and flopped the image) below is the painting from the Museum of Fine Arts in Boston. 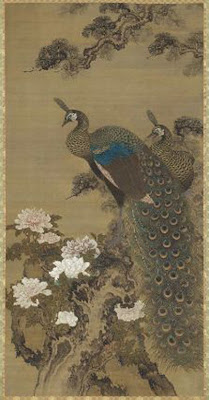