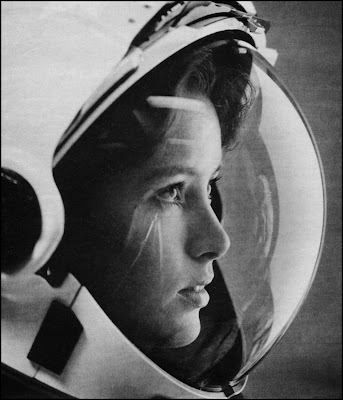 There has been a huge resurgence of interest in a post of mine from April of 2009. And that is this photograph of astronaut Anna Fisher, shown above. I've had a number of emails over all this time asking about the photo and where it was published. And lately someone has been zealous in wanting to secure the rights to print a poster of it for their wall, which has caused a flutter of tweets and twitters and an avalanche of downloads from this site.
Well, even though a lot of people received the information from me via email, just to set the record straight for the source, for those who don't know—this photo is from Life Magazine, May of 1985, credited to Bryson/Sygma, as part of a pictorial celebrating heroines of the eighties, including Mary Lou Retton and Geraldine Ferraro.
But it is this photo that captured our imagination as a sort of rebirth of Kennedy's New Frontier idealism of reaching for the stars. It is obvious that this photo is not an official record from a mission, as astronauts would have had to wear their skullcaps inside the helmet. But it's the wispy sweep of hair that we glimpse and the innocent vulnerable expression that arrests us, reaffirming the human qualities that are at stake in our cosmic endeavors. Indeed Anna Fisher was returning from nine days in space to greet her baby daughter with kisses.
A truly lovely photograph.
Posted by Thomas Haller Buchanan at 9:52 PM

Labels: A few of my favorite things, cosmos, photographs

it's a very lovely photograph. makes me want to be a spaceman.

I love her expression and the reflections in the glass. I agree, the sweep of her hair, echoed in the curves of the helmet, along with her luminous eyes and parted lips, lend her an ethereal, innocent look. She reminds me of angels I've recently seen in paintings. The photographer captured her inner confidence, strength, and natural beauty. I love this quote from you: "It is this photo that captured our imagination as a sort of rebirth of Kennedy's New Frontier idealism of reaching for the stars."

This photo by my father John Bryson is all over the Internet, but I've been trying to track down its magazine source and LIFE magazine says it's not from the issue stated, May 1985.

They did say that Sally RIde was in the magazine in December 1979, but a different angle headshot and she's smiling, some of these can be found on our agencies Corbis or Getty/TIME LIFE.

I recently posted a few of those on our Facebook page for Bryson Photo, the link is with my name on this post, otherwise thanks for the article!