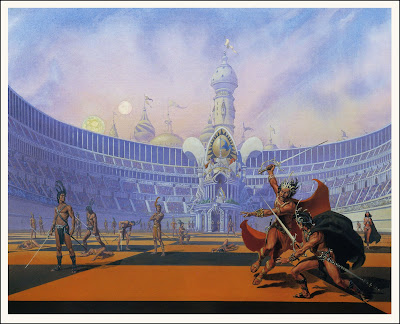 Michael Whelan — The Chessmen of Mars
Edgar Rice Burroughs has such a great legacy of artists exploring his worlds, and forever more Michael Whelan will be among them, with his set of covers for the John Carter series. Above is his epic painting for the wrap-around cover of Chessmen of Mars. It's reminiscent of, but in no way copied from, the 19th century engraving below of ancient gladiators.
I show them together just because I can. 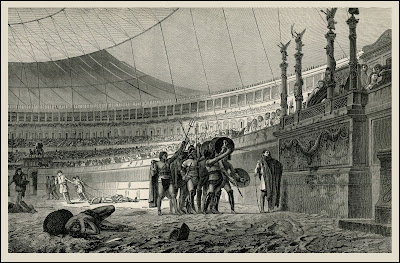 morituri te salutamus — we who are about to die salute thee —
Gladiators saluting the Emperor before joining combat
I love that slice of light in the background.
Posted by Thomas Haller Buchanan at 9:55 AM

Hi Thom,
That slice of light, along with other shading and the tension in the figures, gives the scene dimension and focus. The Michael Whelan book cover illustration is more powerful in each part when you divide it in half. I often think about art in a new way when I come into your site, so thank you!

Thank you Annie for helping to analyze this stuff. Your insight is . . . well . . . insightful.