The Apple of My Eye-yi-yi

I've been told that the part for my computer arrived today and that my repair is on the bench this evening. I inquired as to which part was so elusive that it took so long to obtain. The video card. I calmly informed the polite Apple person that I had a work order that showed that a video card was replaced by them on October 24 and I wondered why it took nearly a month more to determine by the geniuses that the video card was the culprit (again?) and to lay their hands on the part in time to install it on the very day that my deadline was due so that I would now have to work on Thanksgiving Day and the following week so that my client was late to their client and would lose a large portion of their fee, insuring that my @55 was gonna be grass.

Or words to that effect.

The polite employee politely stonewalled me. When I asked if I could expect my machine to be in my hands tomorrow in fine working order, he politely hemmed and hawed that barring other problems---"hopefully".

If I ultimately have to go in and pick it up on Friday, Saturday, or Sunday---the busiest shopping days of the year, I'm going to show up with my daughter's old red wagon to haul my VERY heavy machine the mile or more that I'll probably have to park from the mall that the Apple store is in the middle of.

And then I'll get busy on the letter that I'll be sending to Apple's CEO. I don't fault the various employees that I've dealt with over these past few weeks. I blame the company for the lack of professionalism, communication, and organization. They're busy bragging about their sales of gizmos, while my business is spiraling down the drain without my most essential production tool.

My posted image tonight is a photo I just snapped with the iPad that I'm writing this post with, hunting and pecking one letter at a time.

This is my favorite reading lamp, next to me now, in my 1940s style studio (especially now with the big empty space on the desk where my 21st century magic machine would otherwise be sitting if it wasn't for a very special video card that has taken nearly a month to hunt, capture and send by runner from somewhere in the far reaches of our planet.

Peace be with you through the Thanksgiving weekend. 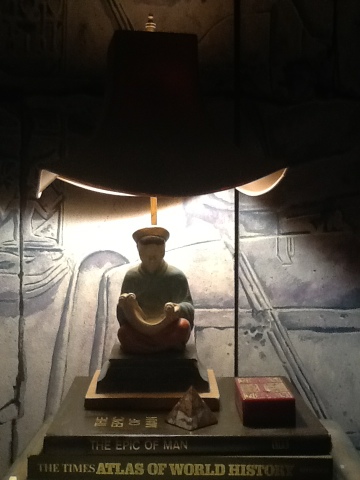 Good luck Thomas. It sounds like a nightmare. The kind of nightmare that typically occurs when dealing with a mega corporation bent on world domination. I hope you are able to have a good holiday.

Your reading lamp is really beautiful, and so is you photo! :)
Wishes again for your MM; and also for your TG feast. It doesn't exist in my part of the world, but I hope a lot of happiness for you and yours!

Anita, you are very sweet!

Larry, you are very talented!

Sim, you are very swell!

Thom,
if pressing thumbs would help, you would have had your (expletive deleted) machine weeks ago and WORKING. And my thumnails would not be blue, black and green.
A great Gobble-gobble-Feast to yours and you!
Hun

Hun, you are very appreciated!

As for the sufferings born from da Apple, my people say "offer it up"

As for life in general, Peace be with you as well

Oh, dear... Your lamp is great. I hope you can enjoy your holiday, and get your machine back in good working order, just in time. Take care... and Happy Thanksgiving... Hugs, if that will help...