Frail as Ghosts Upon a Wizard-Glass

Roy Krenkel was one of the seven wonders of modern fantasy art (I'll let you know who I think the other six are some other time) (I know you know who at least one of the others is).
But Roy also had a fascination with the historic ancient world, civilized and un. He created many sketch studies over the years, illustrating his vision of ancient times. In doing so, he couldn't help but infuse a bit of fantasy here and there to make it all more lively, bless his soul.
I adore Roy's work, as I know many of you do. I only met him once, for just a few minutes, but during that few we managed to talk about ancient history, as we both treasured books of ancient lore, from Ridpaths to obscure delicacies. From him I bought a couple of books and a printed portfolio.
Presented here is that signed and numbered portfolio of Roy's, showcasing his vision of The Seven Wonders of the Ancient World.
This is from Roy's introduction:
Why seven wonders?
—And why this particular seven?
To Antipater of Sidon we owe their designation, which from one whose travels took place during the second century, B.C. seems, even now, to have been a pretty valid choice.
—And no—the reconstructions presented here are not 'authentic'; (120 ft high bronze statues—with outstretched arms—in 300 B.C.? Nonsense of course!) Rather—mood—the 'feel of antiquity'—the splendid, golden profligacy of men who wrought unlikely dreams in bronze and masonry because they deemed the Gods looked on!
Alone of all the Seven, The Great Pyramid of Khufu remains reasonably intact. Of the Pharos—only the tumbled blocks of causeway and platform foundered upon the shifting plates of the Mediterranean. At Ephesus, and at Halicarnassus, fragments of pediment and pillar attest to temple and tomb that once spelled Glory. Of the rest—no more than words blown across the Gulfs of Time—frail as ghosts upon a wizard-glass! 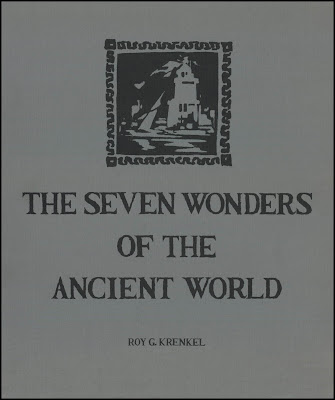 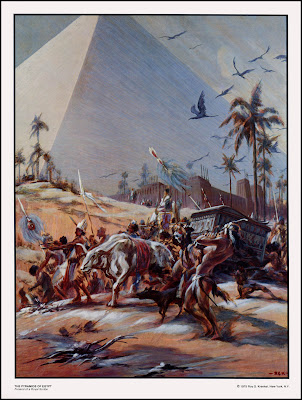 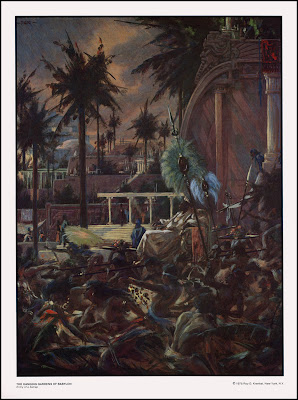 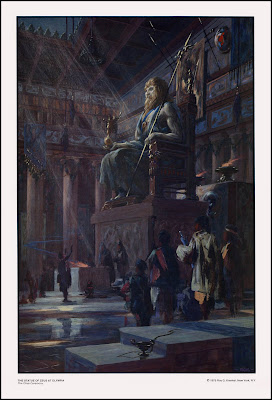 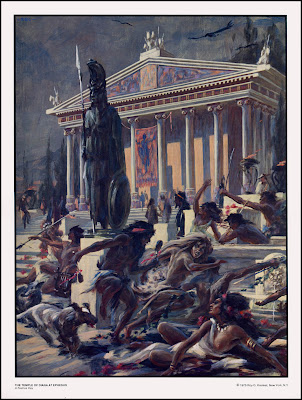 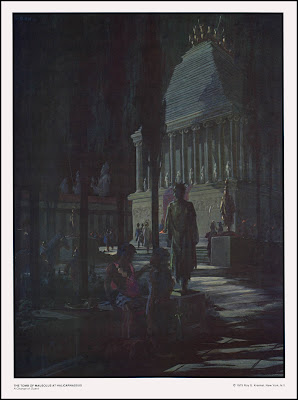 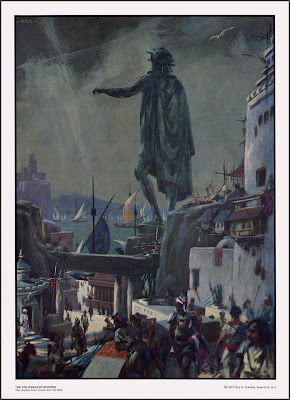 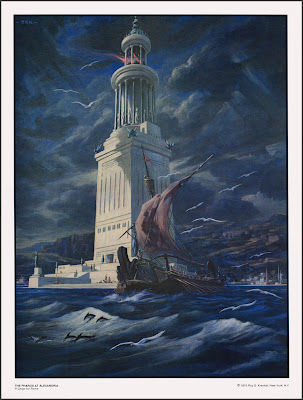 Thanks very much for sharing that. The sugestion of light and motion is wonderful to look at. That quote is magical too - "frail as ghosts upon a wizard-glass". That bears thinking about.

though i almost always prefer Roys pen and ink and pencil work this is really nice stuff!

Hi Thom, Thank you for these. I'm glad you got to meet and talk with him. I also love the quote: "frail as ghosts upon a wizard-glass."

Annie—thank you too. I hope you and your family are doing well.

Also thanks. I was looking a good time for this series and could never find them in a good resolution.
Your work is really incredible.